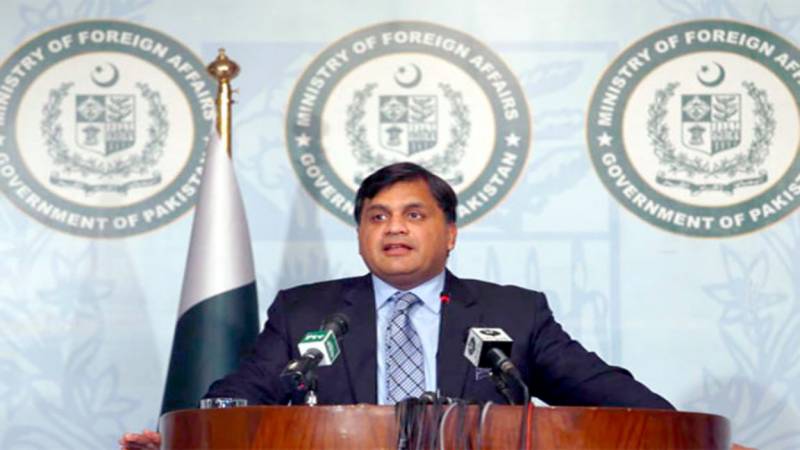 ISLAMABAD: Pakistan has drawn attention of the world community towards Indian attempts to change the demography of Indian Occupied Kashmir to preempt the outcome of any future plebiscite.

Foreign Office spokesperson Dr. Muhammad Faisal during a weekly briefing in Islamabad today said that despite rampant Indian state terrorism, Kashmiris in the held territory observed a complete strike against Indian attempts to abrogate Article 35-A in an effort to strip Kashmiris of their permanent resident status. He termed it a complete violation of the numerous UNSC Resolutions and international law.

Foreign Office spokesperson said Indian forces killed twelve innocent Kashmiris last week in their brutal acts of violence. He expressed deep concern over reports of shifting of senior women Kashmiri leaders from Mandoli Jail to notorious Tihar Jail in New Delhi to exert additional psychological pressure on the families and to keep them away from scrutiny.

He said Indian Deputy High Commissioner was summoned on second of this month to condemn the unprovoked ceasefire violations by the Indian occupation forces along the Line of Control in Mandal Sector, resulting in the shahadat of one innocent civilian. He said so far in 2018, the Indian forces have carried out more than 1400 ceasefire violations along the Line of Control and the Working Boundary, resulting in the martyrdom of 30 innocent civilians, while injuring 121 others.

On a question regarding reported increase in number of surveillance posts along Pakistan's border by India, the Spokesperson said our armed forces are fully equipped and prepared to defend the motherland against any attempt including strengthening of surveillance.

Referring to growing Pak-Russia relations, Dr. Muhammad Faisal said Pakistan and Russia have been successful in building a strong partnership which is based on mutual respect, commonality of interest and convergence of views on important regional and global issues. The two countries have held joint editions of two military exercises in Pakistan in 2016 and in Russia in 2017. Pakistan Navy ship ASLAT visited port of St. Petersburg recently to participate in Russia's Navy Day celebrations last month.

On a question regarding re-imposing of US sanctions on Iran, the Foreign Office spokesperson said Pakistan is examining the implications of these sanctions. However, Pakistan being a sovereign state reserves the right to pursue legitimate economic and commercial interests while respecting the international legal regime.

He told a questioner that Pakistan is ready to make all efforts for peace and stability in Afghanistan. He said Pakistan supports an Afghan led and Afghan owned peace process.