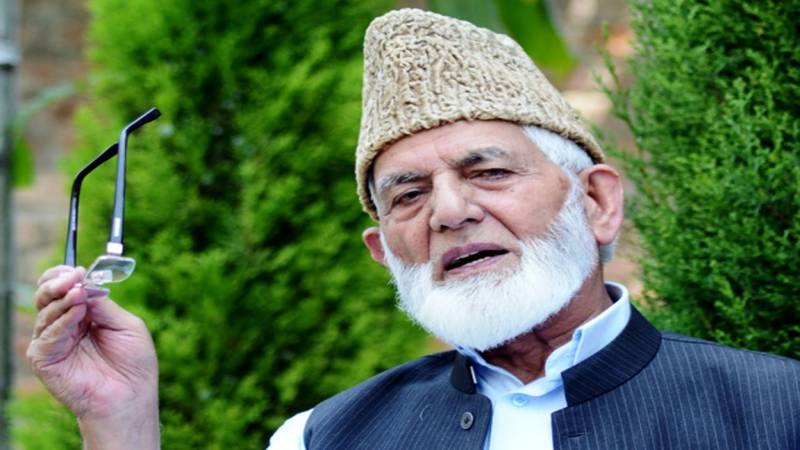 ISLAMABAD: Chairman of All Parties Hurriyet Conference, Syed Ali Gilani has urged UN Secretary General to intervene for resolution of Kashmir dispute in accordance with the aspirations of Kashmiri people.

In a statement in Srinagar on Thursday, Gilani also appealed to United Nations Commission on Human Rights to take cognizance of the plight of detainees lodged in different Indian jails.

In a statement, Kashmir Bar Association urged International Committee of Red Cross and other human rights organizations to send their teams to see the plight of Dukhtaran-e-Millat Chairperson Aasiya Andrabi and her associates Nahida Nasreen and Fahmida Sufi languishing in Delhi’s Tihar Jail.

Tehreek-e-Hurriyet Jammu and Kashmir, Liberation Front and Muslim League in their separate statements condemned the harassment of Hurriyet leaders and activists.

The occupation authorities disallowed jailed Hurriyet leader Sarjan Barkati to attend the funeral of his uncle who died in Islamabad district yesterday.

Police arrested member of so-called Kashmir Assembly Engineer Abdur Rasheed when he tried to lead a march in Srinagar to express solidarity with the Muslims of Jammu region.

Police used force to thwart a teachers’ protest march towards the civil secretariat in the city.

Four Kashmiri students studying at a Benguluru college in Indian state of Karnataka were barred from attending their nursing classes for growing beard.

The students were asked by the college principal to either shave off their beard or leave the college.