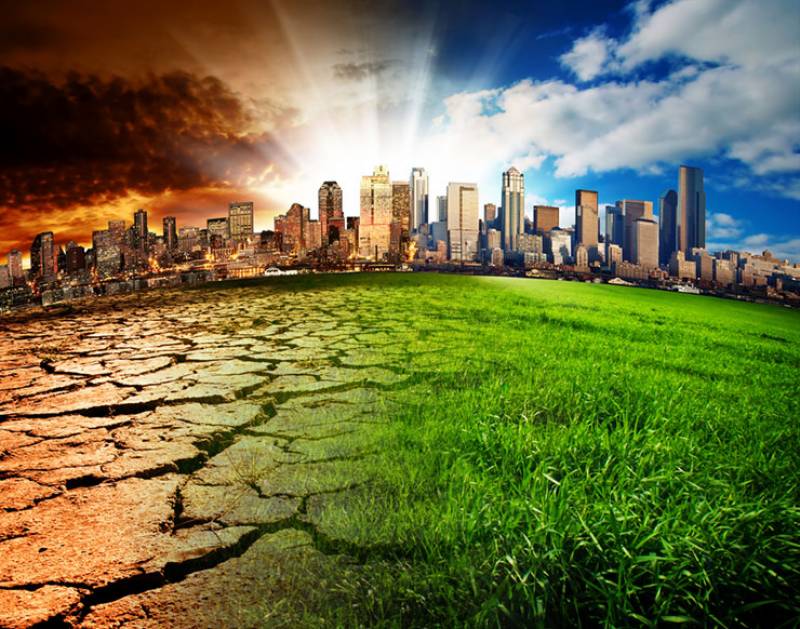 The average global temperature has increased due to increasing concentrations of carbon dioxide and other greenhouse gasses in the atmosphere for last many years.

During the last century, it increased by 0.6oC and is expected to increase further by 1.0oC to 4.0oC till the end of the current century.

Quoting findings of the Intergovernmental Panel on Climate Change (IPCC) reported in its 5th Assessment Report (IPCC-AR5), an official of Ministry of climate change said there will be considerable climatic changes in different world regions.

"The most prominent impacts are increase of average temperature, frequency and intensity of extreme climate events result as floods, droughts, heatwaves and cyclone etc", he told APP.

Pakistan has experienced flooding every year since 2010 which caused huge devastation of life, he said adding, drought prevailed in the southern part of the country during 1998-2001 and has hit again in 2014 in two regions of the country, namely Tharparkar District in Sindh and the Cholistan area in Punjab.

The most recent extreme climate events witnessed by Pakistan are floods hitting various parts of the country during spring and ongoing monsoon season.

The climate change expert informed that a number of research studies have been conducted by various institutions to assess the impact of climate change on various socio-economic sectors of our economy and to evaluate possible changes in extreme climate events i.e. floods, droughts, heatwaves etc.

Global Change Impact Studies Centre (GCISC), a dedicated research institute for climate change studies in the country serving as a research arm of the Ministry of Climate Change, has conducted studies on climate change, climate extremes and impacts of climate change on water resources and agriculture, he informed.

Climate change projections made at GCISC indicates that the average temperature over Pakistan will increase in coming decades at a pace faster than that of the average global temperature.

It may exceed it by about 1 oC by the end of this century resulting in the increase in the probability of occurrence of extreme climate events such as floods and droughts.

GCISC studies have also shown that the increasing temperatures will negatively impact crop yields in Pakistan posing a serious threat to the food security of the country.

The water security of the country is also threatened by the climate change. The increasing temperatures in the northern mountains of the country will result in glacier melting, thereby affecting the flows of Indus River System (IRS), he said.