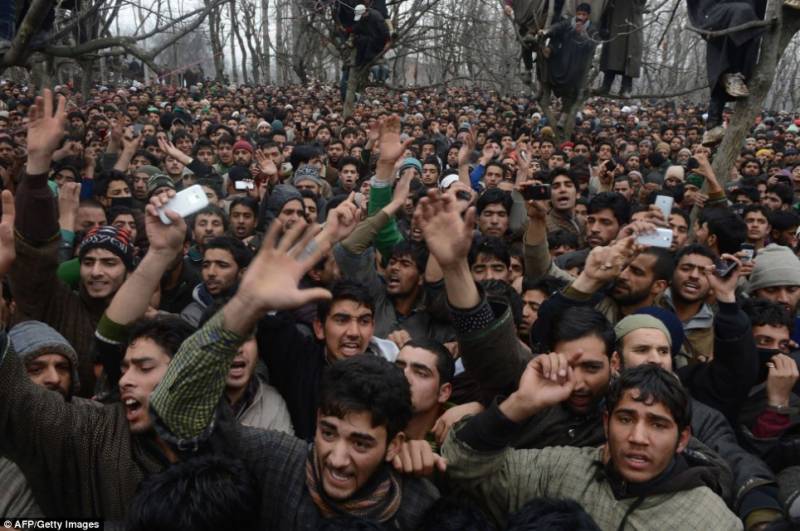 SRINAGAR, India (APP/AFP) - Tens of thousands of mourners attended the funeral of a top militant commander as tensions intensified in Indian-occupied Kashmir on Saturday, with authorities imposing a curfew on large parts of the disputed region and suspending mobile networks and internet.

Burhan Wani, a 22-year-old commander of Hizbul Mujahideen (HM) was killed on Friday along with two other militants during a brief gun battle with government forces.

Authorities handed the body of Wani, viewed by locals as a hero since he joined Hizbul Mujahideen at the age of 15, over to his family early Saturday morning.

"As people keep turning up to have a glimpse of the commander's body, multiple funeral prayers are being held. His body is floating on a sea of people," a witness said.

"The actual burial may not happen before dark."

Streets in the main city of Srinagar were deserted except for hundreds of soldiers and police ordering people to stay indoors.

"Yes we have imposed a curfew, but of course his (Wani's) funeral was allowed," director general of police for the Indian-held region, K. Rajendra told AFP.

Another police officer, speaking on condition of anonymity, said angry residents defied restrictions in many places across the Himalayan valley and clashed with government forces who fired tear gas and warning shots into the air.

Wani's death had sparked protests and clashes throughout the night Friday while mosque loudspeakers blared "Azadi" (freedom from Indian rule) in most areas, including Srinagar.

"Aftr many years I hear slogans for 'Azadi' resonate from the mosque in my uptown Srinagar locality," former chief minister of the disputed state, Omar Abdullah, said on Twitter.

Resistance groups opposed to Indian rule of Kashmir have called for three days of mourning and a shutdown in the territory after the commander's killing.