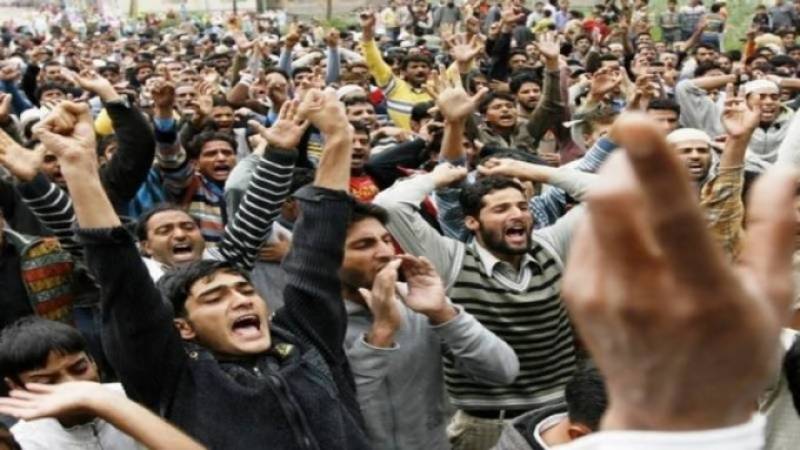 ISLAMABAD - In occupied Kashmir, massive protest demonstrations were held against the gang rape of a minor Muslim girl in Ramban district of Jammu. Leaders of religious organizations, social activists and members of several NGOs held separate protests on the Srinagar-Jammu highway in Ramsoo and district office complex, Maitra, against the rape of the girl, KMS reported. The girl who is three months into her pregnancy is currently undergoing treatment at a hospital in Jammu, said a protester. He said the matter came to light after the girl became sick a few days ago. “She was shifted to a hospital where doctors told the parents about her pregnancy.” While addressing the protesters, social activist-turned politician, Advocate Choudhary Talib Hussain, said, “I have been informed by the people that some police officers, posted in Ramban district, are trying to hush up the matter. They (police officers) are trying to protect some of the accused by pressurizing the investigation team.” The protesters threatened that they would go to any extent to get justice for the 13-year-old girl from Varnal Sarbagni. “The innocent child was gang raped multiple times by the five accused. The girl and her parents have already identified all the accused, but only one accused has been arrested by the police. How is this justified?” they asked. It is pertinent to mention here that another 13-year-old nomadic girl was raped around 8 months ago and a case was registered at Ramsoo police station. Besides her, an 8-year-old Muslim girl, Aasifa, was abducted, raped and ruthlessly killed by the Hindu religious men and a Hindu police officer in January 2018 in Kathua district of Jammu region.