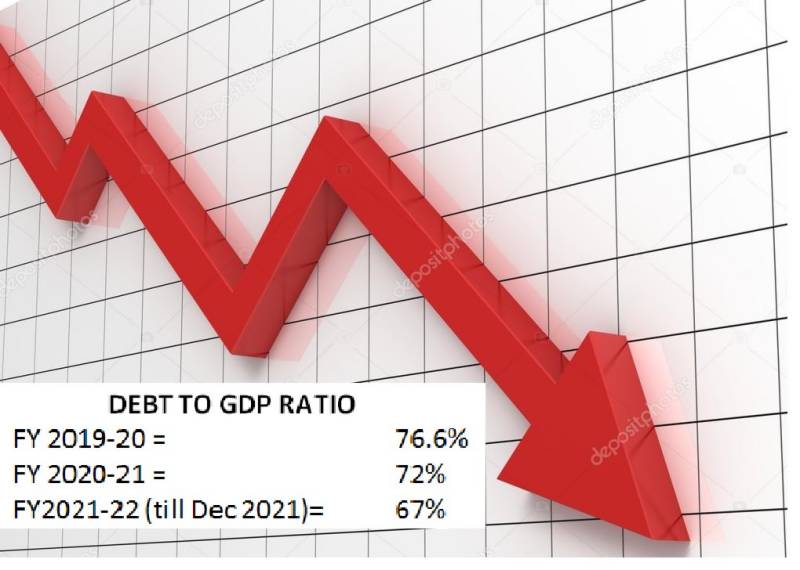 ISLAMABAD: Public debt, as a percentage of Gross Domestic Product (GDP), decreased to 72 percent during the fiscal year 2021, from 76.6 percent in FY 2020, finance ministry said here Friday while rebutting an article published in a section of press.

According to the latest published data, public debt to GDP is estimated to have declined further to 67% of GDP as of December 2021, said a press statement issued by the finance ministry.

The article on ‘Public debt soars by Rs18 trillion’ “published by Express Tribune in its edition on April 6, 2022 is misleading and the author’s comparison of the 2008 to 2022 period fails to take into account the significant changes in the size of the economy,” the statement added.

It said, the economy’s capacity to take loans today was higher than compared to previous years due to the significant increase in the size of the GDP. A better analysis would have focused on the public debt as a percentage of GDP, the standard indicator used by all international publications.

According to the statement, Pakistan was one of the few countries that managed to reduce its debt despite the significant impact of COVID on public finances.

Secondly, it added, the author needs to understand that the increase in outstanding public debt does not necessary mean new borrowing by the government.

The change in stock of outstanding public debt is primarily on account of interest payments on debt accumulated over the last 10 years, exchange rate revaluation of external debt, and cash balances maintained by the government with the central bank.

These do not represent new borrowings as the author suggests in the published article.

New borrowing by the government during July 2018 to Feb 2022 is only Rs 5 trillion – which is equivalent to the primary deficits run during this period. The article wrongly attributes new borrowing at Rs 18 trillion.

The interest payments on debt accumulated over the last 10 years is estimated to be Rs 9 trillion during the last three and a half years. The impact of the exchange rate and the revaluation of the external debt is estimated around Rs 4.4 trillion. Whereas the government currently maintains cash balances of around Rs 0.6 trillion with the central bank to meet emergency cash requirements.

The new borrowing undertaken by the PTI led government of Rs 5 trillion over the last three and a half years has been used primarily for scaling up spending on the poorest households and welfare of the masses.

During the COVID crisis the government launched a record fiscal and monetary stimulus package of Rs 2.5 trillion (6% of GDP or $ 16 billion) which focused on emergency cash assistance to 15 million families through the Prime Minister’s EHSAAS program, the largest ever social welfare transfers in Pakistan’s history covering nearly 45% of the total population.

On top of this the government has provided free of cost vaccination to over 127 million citizens against COVID.

“Our government has taken unprecedented relief measures to shield the most vulnerable households during the current crisis with record high international commodity prices,” it added.

The government has reduced taxes on all petroleum products to 0% and frozen prices at the pump to shield consumers. As a result, the domestic consumers are paying Rs 150 / litre on petrol compared to Rs 187/ litre in Bangladesh and Rs 244/ litre in India.

Similarly, the low and middle income households have been provided relief on their power consumption by a Rs 5 per unit reduction in their monthly bills. An estimated Rs 300bn relief has been provided to the masses to shield them from the rising international energy prices.

Prime Minister Imran Khan launched the Ehsaas ration scheme in March 2022 to provide relief to over 20 million households (54% of total population) on purchase of essential food items including flour, pulses and cooking oil.

These 20mn households will receive these essential commodities at a discount of 30% from the market prices. On top of these measures, the landmark universal healthcare program Sehat Insaf card has been launched in Punjab and certain districts in Sindh and Balochistan in 2022.

More than 60% of all households in Pakistan will now get free hospitalization and healthcare, providing savings of Rs 10 lakh to each citizen.