Both Pakistan has Srilanka have become victim of US regime change for backing Russia: International media report
9 Apr, 2022 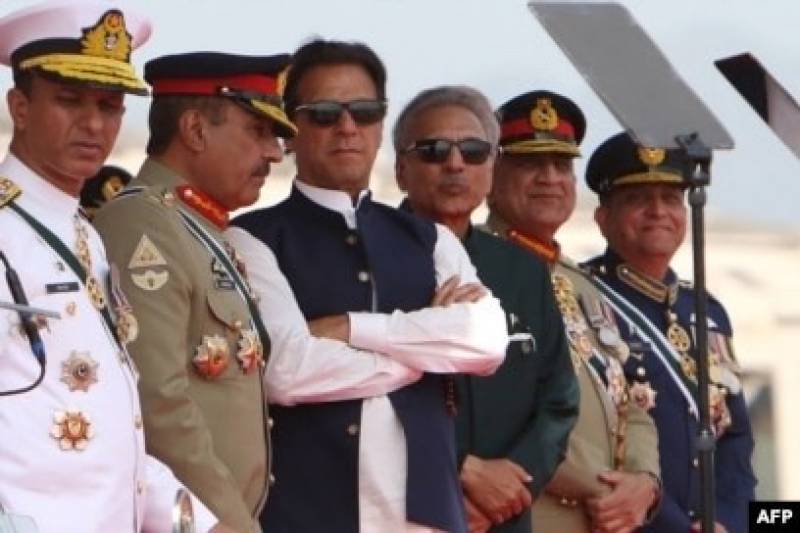 On April 3, Pakistan’s Prime Minister Imran Khan dissolved link his country’s parliament to stop an opposition-led effort to remove him from office.

Some two dozen lawmakers had recently left the government of Khan’s ruling Pakistan Tehreek-e-Insaf (PTI) party. That set the stage for opposition members of Pakistan’s 342-member National Assembly (lower house of parliament) to hold a no-confidence vote on March 8.

On April 7, Pakistan’s Supreme Court ruled link Khan’s move to block his removal was unconstitutional and said the National Assembly must be restored.

The vote of no confidence against Khan is expected to go forward on April 9.

Khan and other political allies had earlier claimed link that the effort to oust him was “blatant interference in domestic politics by the United States.”

And Russia has backed that narrative, with Khan and others claiming the bid to oust him stems from Pakistan’s refusal to condemn Russia’s invasion of Ukraine.

“The further development of the situation leaves no doubt that the United States decided to punish the ‘disobedient’ Imran Khan,” Russian Foreign Ministry spokeswoman Maria Zakharova said on April 4, citing the PTI members’ “sudden” decision to join the opposition.

"This is another attempt at shameless interference by the U.S. in the internal affairs of an independent state for its own selfish purposes. The above facts eloquently testify to this. The Prime Minister of the Islamic Republic of Pakistan himself has repeatedly stated that the conspiracy against him is inspired and financed from abroad.”

In fact, Khan hasn’t orovided any serious evidence that the U.S. is out to get him, and the U.S. State Department says it’s untrue.

Khan had earlier link claimed that the Western-backed “foreign conspiracy” was sparked by his decision to visit Russia as Moscow launched its war of aggression against Ukraine on February 24. Pakistan also was one of 38 countries to abstain from a United Nations vote condemning Russia’s invasion of its neighbor.

Khan claimed to have an “official document” proving the conspiracy to topple him.

Khan pulled a paper out of his pocket at a large public rally on March 27. He had earlier described the document as “the formal communication of a senior official of a foreign country to Pakistan’s ambassador in the said country in a formal meeting,” Reuters reported. According to the news agency link, Khan referenced the United States before correcting himself and saying “a foreign country.”

“I am telling my nation today that this is our status. We are a nation of 220 million and another country — and they are not giving any reason — [is issuing threats]. They said that Imran Khan decided to go to Russia on his own even though the Foreign Office and the military leadership was consulted,” India’s The Tribune newspaper quoted him link as saying.

“Our ambassador told them that the decision [to visit Russia was made after consultations] but they are denying it and saying that ‘it was only because of Imran Khan and that our ties cannot be good if he stays.’ What they are actually saying is that they have no issue with the people who will replace Imran Khan.”

Khan claimed the communique stated that Pakistan would be “forgiven” if the no-confidence vote against him passed and threatened “consequences” if it didn’t.

A reporter from the Voice of America’s Urdu service asked link U.S. State Department spokesman Ned Price about the purported letter on March 31.

Price said the United States supports “Pakistan’s constitutional process and the rule of law,” adding “there is no truth” to Khan’s allegations.

Unconfirmed news reports in India link and Pakistan link, citing official and diplomatic sources, said the letter was actually a diplomatic cable about a meeting between Pakistan’s ambassador to the United States and U.S. officials. That cable was reportedly sent on March 7 — one day prior to the no-confidence motion being submitted.

Writing for the Council on Foreign Relations, Pakistani author and journalist Zahid Hussain said link “there is little evidence” to back claims that foreign powers orchestrated the no-confidence motion.

“More likely, the government purposely exaggerated an informal conversation between a former Pakistani ambassador in Washington and an American diplomat to build a narrative that paints the opposition’s democratic move as a foreign conspiracy,” he wrote.

On March 30, members of Khan’s government said they would present the alleged incriminating document to the Chief Justice of Pakistan.

“If someone has doubts, the prime minister says if necessary, and for the people’s satisfaction, he is ready to present the letter to the chief justice of the Supreme Court, as he enjoys a good reputation,” Minister for Planning and Development Asad Umar said link .

Shehbaz Sharif, the opposition leader and president of the Pakistan Muslim League-Nawaz (PML-N) political party, who was alleged to be part of the conspiracy, called on the government link to do just that.

If it exists, the evidence should be presented to the country and the Supreme Court, he said. "We will make this demand through our lawyers and request it to review the matter and create a forum which clarifies it,” Sharif said.

Khan’s political misfortunes have been tied to link sky-high inflation — the worst in South Asia — and strained relations with the military, which has long played an outsized role in the country’s political life.

Since Pakistan gained independence in 1947, no Pakistani prime minister has completed link a full five-year term. The military has staged link a number of successful coups, and the country has spent decades under military rule.

As in Pakistan, some Sri Lankan netizens, without evidence, are claiming the United States is orchestrating regime change in Sri Lanka because it abstained from the U.N. vote to condemn Russia’s invasion.