Sri Lanka suicide blasts: Who is behind all this terrorist activity?
8 May, 2019 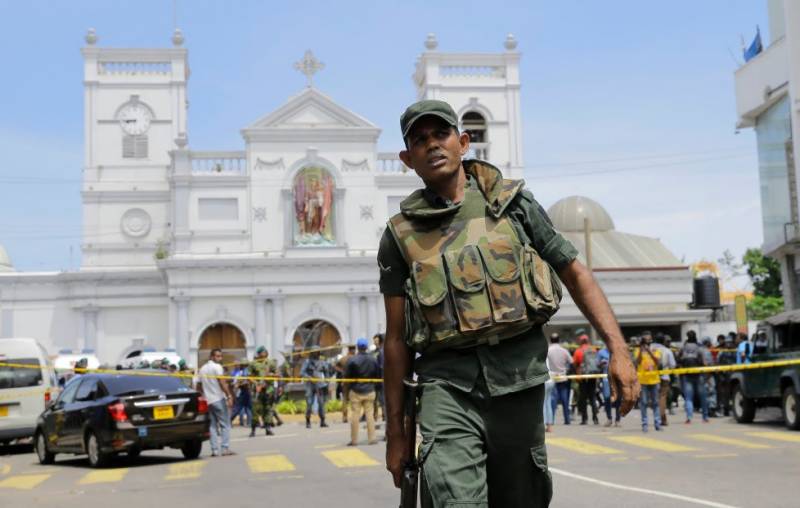 ISLAMABAD - PRESIDENT Sirisena has vowed to “meet the challenge and defeat terrorism” in the country. There are four probable streams that could have propelled the Easter attacks in Sri Lanka, reaction to State run anti-drug campaign, Daesh fighters, India, and a combination of these.

Though Daesh has accepted the responsibility, Indian state terrorism, this time, riding the ISIS vehicle cannot be overlooked. After having lost its substantial territories and fortune Daesh may be too willing to do a project for India. Sri Lankan decision to lease out Hambantota Port to China for 99 years, in December 2017, in exchange for offsetting its debt taken from China, had upset India beyond redemption.

Though China and Sri Lanka maintain that Hambantota Port was purely a commercial project, India and its anti-China allies think otherwise. In 2014, Chinese submarines came calling the port the same day when Prime Minister Shinzo Abe of Japan was visiting Colombo, this was viewed as an ominous signal from China. India views Indian Ocean as its national lake, so couldn’t have stomached it easily.

Though the final lease agreement forbids military activity there without Sri Lanka’s invitation, Indian officials, and some Sri Lankan analysts fear that the Chinese government may be able to dangle debt relief in exchange for its military’s use of assets like the Hambantota Port.

“The only way to justify the investment in Hambantota is from a national security standpoint — that they will bring the People’s Liberation Army in,” said Shivshankar Menon, India’s former National Security Adviser. In an interview with The Times, Nihal Rodrigo, a former Sri Lankan Foreign Secretary and Ambassador to China characterized the Chinese line as, “We expect you to let us know who is coming and stopping here.”

Soon after coming to power, President Sirisena showed keen to reorient Sri Lanka towards India, Japan and the West. But soon realized that no other country could fill the economic space that China held in Sri Lanka. So India may have lost the patience and re-embraced erstwhile Indra Ghandi Doctrine to keep Sri Lanka destabilised as its Foreign Policy objective. Maria Abi-Habib reported for New York Times on June 25, 2018, captioned:

“How China Got Sri Lanka to Cough Up a Port”: “This transfer gave China control of territory just a few hundred miles off the shores of a rival, India, and a strategic foothold along a critical commercial and military waterway”. Handover of Hambantota to the Chinese has kept alive concerns about its military use.

Besides Sri Lankans, at least 40 foreigners were also killed, including British, US, Australian, Turkish, Indian, Chinese, Danish, Dutch and Portuguese nationals. Most of the foreigners were tourists, sitting down to breakfast at the hotels when the bombers struck. Various countries have warned their nationals to avoid Sri Lanka unless it was absolutely necessary. It will a long time to revive the tourist industry to pre-Easter level. Investigations into war-time rights abuse allegations had weakened Sri Lanka’s security mechanism.

Officials have affirmed a major lapse in not widely sharing intelligence warnings from India of possible attacks.

President Sirisena said that top defence and police chiefs had not shared information with him about the impending attacks. Opposing factions aligned to Wickremesinghe and Sirisena have often refused to communicate with each other and blame setbacks on their opponents. He further said that the planned attack could have been a response to his campaign against illicit drugs.

“There is a nexus between international terrorism and international drug trade,” he said. International media especially that of India were in the forefront in naming a local Islamist extremist group called the National Tawheed Jamaath (NTJ). Sri Lankan authorities have so far focused their investigations on international links of the two domestic groups they believe carried out the attacks, (NTJ) and Jammiyathul Millathu Ibrahim.

Sri Lanka Tawheed Jamaath (SLTJ) is an associated arm of Indian Tamil Nadu Tawheed Jamaath (TNTJ). Its other branches are in the ME, US, UK, France and Australia.Zahran Hashim, who is believed to have masterminded Easter attacks in Sri Lanka, had spent substantial time in southern India. Indian officials would not comment on Hashim travelling to India.

Nine home-grown, well-educated suicide bombers carried out the Easter Sunday attacks, eight of whom had been identified. One was a woman. After the attacks, Daesh released a video showing eight men, all but one with their faces covered, standing under a black Islamic State flag and declaring their loyalty to its leader, Abu Bakr Al-Baghdadi. “We are looking into the Islamic State angle. We also suspect that some of those radical youth were indoctrinated and trained in India, possibly Tamil Nadu,” a senior Sri Lankan official said.

Underscoring Pakistan’s support to the war on terror, Prime Minister Ranil Wickremesinghe said Colombo may seek Islamabad’s help to trace terrorists. In a written interview to the Hindustan Times, Wickremesinghe said Pakistan has fully supported Sri Lanka’s war on terror. “If necessary, we will seek their help to trace the terrorists and eliminate them.”

He dismissed Hindustan Times’ insinuation connecting Pakistan to the bombings. “Pakistan has extended all out help and support to Sri Lanka,” he stressed. Pakistan has condemned these terror attacks. “Pakistan stands in complete solidarity with Sri Lanka in their hour of grief,” said Prime Minister Imran Khan in a message offering condolence and support.

BY: Iqbal Khan —The writer is a freelance columnist based in Islamabad.