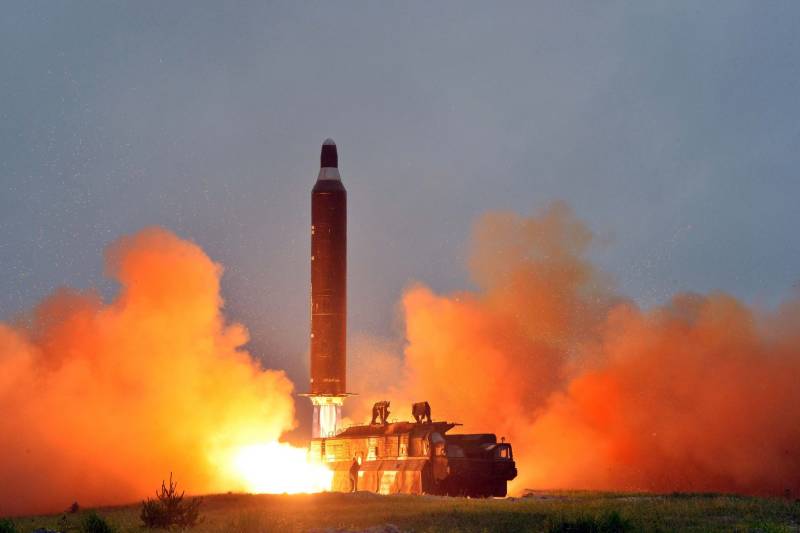 In response, the United States started the early deployment of its advanced Terminal High Altitude Area Defense (THAAD) anti-missile system in South Korea on Tuesday, despite angry opposition from China.

THAAD’s job is to intercept and destroy a ballistic missile in its final phase of flight, either inside or just outside the earth’s atmosphere.

But with its specifications secret and having never been used in wartime, THAAD’s ability to deal with a barrage of missiles at the same time is uncertain.

“The use of multiple shots, timed ever-more-closely together, appears destined to rehearse saturating a defensive system by presenting it with an overwhelmingly complex radar picture,” Joshua Pollack, editor of the U.S.-based Nonproliferation Review, said of Monday’s launch.

South Korean military and intelligence officials said the four North Korean missiles appeared to be an upgraded version of the Scud type – the “ER” or “Extended Range” Scud.

“An advantage of the ER Scud over the Rodong is that the ER Scud is much cheaper,” said Jeffrey Lewis of the California-based Middlebury Institute of International Studies.

Most experts believe North Korea would likely need to fire off more than four ballistic missiles at one time to inundate a THAAD battery – perhaps 10, according to Michael Elleman, a U.S.-based rocket expert with the International Institute for Strategic Studies.

“I would be disappointed to learn that four attacking missiles would overwhelm THAAD,” he said.

“The specific number of threats (THAAD) can engage at once is classified, but we have successfully demonstrated the ability to engage multiple targets,” Pentagon spokesman Gary Ross said.

A greater concern than multiple Scud-type missiles would be if North Korea proved the ability to fire simultaneous salvos of other types of missiles that could carry heavier payload, said one U.S. official, speaking on the condition of anonymity.

To counter that risk, South Korea, Japan and the United States have installed layers of different missile defenses that can work together to reduce the threat.

“If all three nations and their assets are integrated – and they can be integrated, there are systems for doing that – then the system has a synergy that is quite remarkable,” Bermudez said.

In addition to the new THAAD system, South Korea also operates a Patriot PAC-3 missile defense system while Japan is upgrading its PAC-3 defenses and mulling a shore-based version of the Aegis missile-defense system used on Japanese ships.

North Korea’s actions have also prompted discussions in Tokyo about THAAD, which, because it is already in operation with the U.S. Army, may be an easier-to-deploy alternative to the Aegis system.

A deployed THAAD battery comprises four parts: The truck-mounted launcher; eight anti-missile “interceptors” which can destroy an incoming missile; a radar system, and a fire control system which connects the battery to U.S. military commanders.

“The number of interceptors is limited, and the number that one THAAD system could handle at once is limited, too,” said Markus Schiller, a rocketry expert based in Germany.

“THAAD has fared well in tests, but has not been used in real combat, under real conditions,” Schiller added.

It is THAAD’s sophisticated radar, which according to the U.S. Missile Defense Agency is the “largest air-transportable x-band radar in the world”, that has spurred tensions with China.

Once fully deployed in South Korea, a THAAD battery could theoretically use its radar to see and monitor activity beyond North Korea, deep into Chinese territory.

Russia also worries the deployment could compromise its security, and said it would lead to a stalemate on the Korean peninsula. Separately, Moscow has criticized a ballistic missile defense shield which the United States has activated in Europe as a step to a new arms race.

U.S. Pacific Command said in a statement accompanying the announcement to start deploying THAAD in South Korea that the system is “strictly defensive” and poses “no threat to other countries in the region”.

So far, only the “first elements” have arrived, with the rest due to arrive by April, Yonhap news reported.

The planned location for South Korea’s two THAAD launchers in the rural county of Seongju means Seoul is outside of their protective range.

But with so much conventional North Korean artillery pointed at the South Korean capital, just 40 km (25 miles) from the North Korea border, Pyongyang could carry out its threat to turn Seoul into a “sea of fire” by using only its Soviet-era guns.