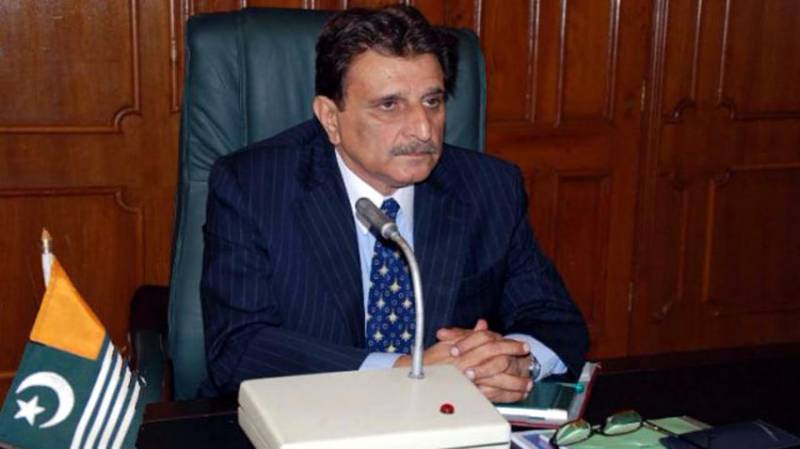 the global community to initiate "boycott, divestment and sanctions" campaign

persecution of minorities in India.

"The Hitler of 20th century, Narendra Modi has imposed the latest model of Nuremberg Laws under the label of domicile law, and it is high time that the international community take its notice and stop India from playing this

The Kashmir Conference co-hosted by Raja Sikander Khan and Kala Khan in London proposed a campaign for imposing sanctions on India to stop its atrocities and colonisation in IOJK and declaration of RSS as a global terrorist organization, AJK Presidential Secretariate told media here on Monday.

non-Hilal meat from India, which is a good development. Terming the one

million-strong diaspora communities as Pakistan’s asset, the President urged Pakistani and Kashmiri expatriates to keep the Kashmir cause alive and redouble their efforts to highlight the happening in Indian Occupied Jammu and Kashmir.

Masood Khan said member of parliaments from United Kingdom and the European Union are playing an excellent role to project the Kashmir issue in its true perspective.

Explaining the situation in Indian occupied Kashmir, he said people of the territory have been living under double lockdown. The first lockdown was imposed by India on August 5, last year and now the corona lockdown since March this year.

Unfortunately, the Indian government did not take any steps to protect the Kashmiri people from the coronavirus because it considers the Kashmiri people as its enemy, he regretted and added that Personal Protective Equipments, face masks and sanitizers are not being provided to common people and doctors in the occupied state.

The state president also urged the UN Human Rights Council to immediately set up an independent investigation commission to probe human rights violations as recommended by the UNHCHR’s two reports on Kashmir.

Appreciating the EU MPs and the UK MPs for raising Kashmir issue, and hoped that the UK MPs will once again raise this issue in the parliament, and convince the UK government and Prime Minister Boris Johnson to talk to the Indian Government

for the implementation of the UN resolutions.

He also thanked the eminent participants for their forceful contributions.

Governor Punjab Chaudhry Mohammad Sarwar and other speakers paid glorious  tributes to Kashmiri  martyrs and people  of Jammu Kashmir for continuing  the struggle for liberation of the homeland from long Indian slavery lending supreme  sacrifices of their lives without taking care of the continual  Indian reign of state terrorism and violence.