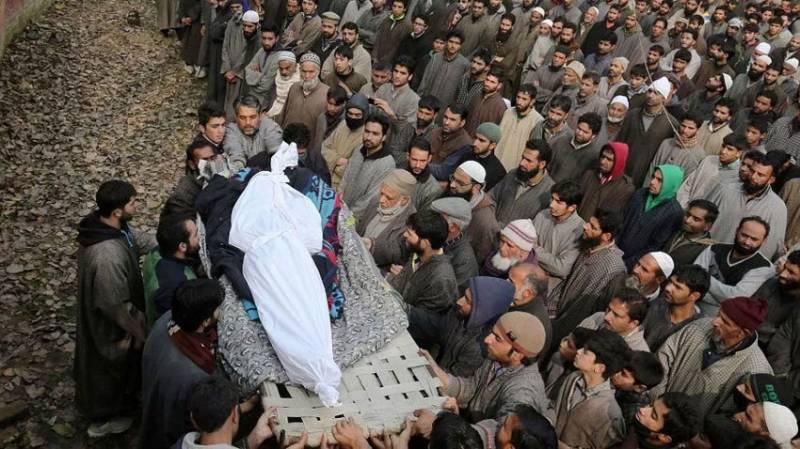 In Occupied Kashmir, Indian troops in their fresh act of State terrorism have martyred four Kashmiri youth in Pulwama district.

According to Kashmir Media Service, these youth were martyred during cordon and search operation at Punjran area of the district.

Meanwhile, an Indian Army personnel was killed in an attack at Sadura area of Islamabad district of the Indian Occupied Kashmir.

Meanwhile, the occupation authorities suspended internet service in Pulwama and several other areas of south Kashmir.

The Chairman of Tehreek-e-Hurriyat, Muhammad Ashraf Sehrai, and Hurriyat leader, Mushtaq-ul-Islam, in their statements in Srinagar paid rich tributes to the martyred youth.

It said that instead of releasing the Kashmiri political prisoners on the eve of Eid-ul-Fitr, New Delhi had booked them in fresh cases which clearly exhibited arrogance of Indian state against the Kashmiris.

Islami Tanzeem-e-Azadi in a statement issued in Srinagar strongly condemned the slapping of black law, Public Safety Act, on its illegally detained Chairman, Abdul Samad Inqilabi, for the third time and lodging him to Kot Bhalwal Jail in Jammu.

On the other hand, an Indian paramilitary commando committed suicide by shooting himself with his service rifle while on duty in Mastpora Keller area of Shopian district.

This incident raised the number of such deaths amongst the Indian troops and police personnel to 430 in occupied Kashmir since January 2007 till date.

An Indian soldier was injured in a landmine blast in Jullas area of Poonch district of Jammu region, today. Two Indian policemen were injured when unknown persons lobbed a grenade towards Sopore police station, today.

On the other hand, Indian police and troops arrested four Kashmiri youth from Udhampur, Doda and Kathua districts of Jammu region.