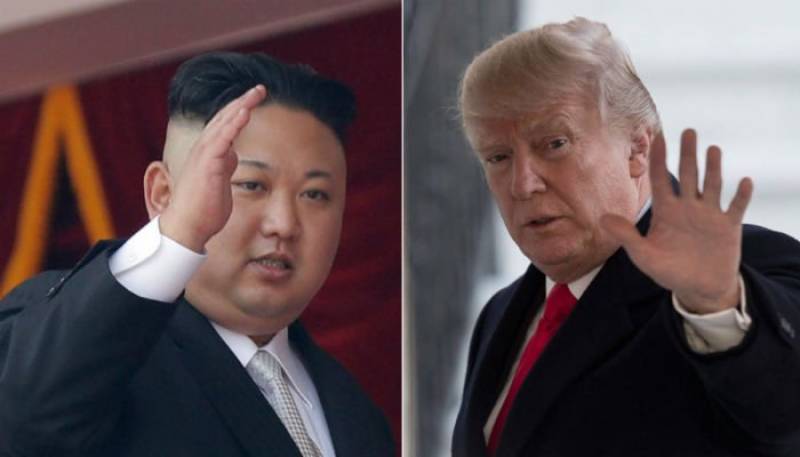 SEOUL: The issue at the top of US President Donald Trump's agenda for his summit with North Korean leader Kim Jong Un is also the most complicated -- denuclearisation.

Pyongyang´s decades-long pursuit of atomic weapons and the means to deliver them to the US have seen it subjected to multiple rounds of sanctions by the UN Security Council, US, EU and others, and tensions soared last year as the two men traded personal insults and threats of war.

Now after a rapid diplomatic rapprochement they will hold an unprecedented meeting in Singapore.

But despite the positive imagery of recent months -- and the global headlines the summit will generate -- the gap they will need to breach is a chasm.

"It does strike me as very difficult for Kim to give up the only thing that makes him important and that is nuclear weapons," former US deputy Secretary of State Richard Armitage told reporters in Tokyo.

"The distance from where we are now to where we need to be is measured in years."

Washington is demanding the North give up its weapons in a complete, verifiable and irreversible way (CVID).

Pyongyang, for its part, has repeatedly expressed a commitment to the denuclearisation of the peninsula, but the phrase is a diplomatic euphemism open to interpretation on both sides and the North has given no public indication of what concessions it might be offering.

Instead Kim has -- according to Chinese state media reports of his discussion with President Xi Jinping -- called for Washington and Seoul to "remove security threats against the DPRK" and take "phased and synchronous" steps in response to its own moves.

The comments are a clear indication that Pyongyang will seek concessions of its own.

Early signals from the US suggested Washington expected the North to hand over its arsenal.

National security advisor John Bolton´s reference to a "Libya model" infuriated Pyongyang, given that leader Moamer Kadhafi was deposed and killed in a NATO-backed rebellion after abandoning his nuclear programme.

More recently Trump has dialled down immediate expectations, saying the summit could be the first of several.

"I think it´s not a one meeting deal," he said Thursday, but insisted: "If they don´t denuclearise, that will not be acceptable."

The impoverished North has devoted vast resources to its weapons programmes, making rapid progress under Kim.

Last year it carried out by far its most powerful nuclear test to date -- with a yield commensurate with an H-bomb -- and launched intercontinental ballistic missiles (ICBMs) capable of reaching the US mainland.

Aside from its nuclear arsenal, the North is also believed to have 2,500 to 5,000 tonnes of chemical weapons developed since the 1980s, according to the South´s military.

It has yet to conclusively demonstrate that it has the capability to shrink a nuclear warhead to fit inside a missile, accurate targeting, or the re-entry technology needed for it to survive coming back into the Earth´s atmosphere from space.

But it says it has mastered all three, and Kim has declared the development of the country´s "treasured sword" complete.

Seoul puts the North´s plutonium stockpile at more than 50 kilogrammes, enough to produce around 10 weapons, adding Pyongyang also has "a significant amount" of highly-enriched uranium.

"For the Trump administration, the essence of the talks is likely to boil down to ICBMs and nuclear warheads," Hong Min, analyst at the Korea Institute for National Unification, told AFP.

Siegfried Hecker, a noted US nuclear expert, said the immediate CVID of the North was "unimaginable" and "tantamount to a North Korean surrender scenario", and proposed a 10-year roadmap to "halt, roll back and eliminate" its weapons programmes.

But speculation is mounting in Seoul that Trump -- who pledged at his inauguration to put "America first" -- could accept Pyongyang giving up its ICBMs and freezing its atomic programme at current levels in exchange for recognising it as a nuclear power.

That would remove the threat against the US mainland, while leaving Washington´s allies South Korea and Japan still within Pyongyang´s reach -- a scenario likely to alarm Japanese Prime Minister Shinzo Abe in particular.

The leader of South Korea´s main Liberty Korea opposition party on Thursday urged Trump not to agree to "any deal" purely to guarantee the security of the US.

Hong Joon-pyo raised the spectre of the 1938 Munich Agreement, in which then British Prime Minister Neville Chamberlain agreed Nazi Germany could seize part of Czechoslovakia.

"It would be very unfortunate if the fate of the Republic of Korea is decided as a result of a battle for hegemony between the US and China," the North´s traditional backer, he told reporters.

If Pyongyang were tacitly recognised as a nuclear power, he said, "there will be only one option for South Korea and Japan".

"We have to arm ourselves with nuclear weapons."