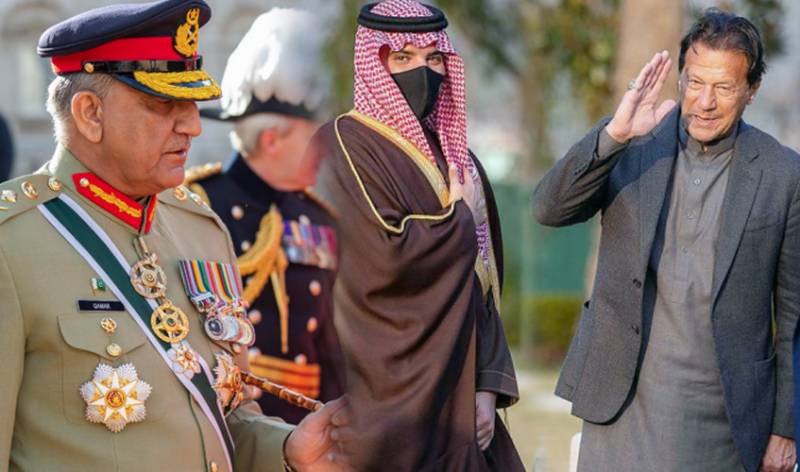 A statement issued by the Prime Minister's Office said the premier met Saudi Interior Minister Prince Abdulaziz bin Saud bin Naif and expressed his gratitude to the kingdom for its steadfast support to Pakistan, especially in challenging times.

Khan also expressed hope for the repatriation of Pakistani inmates from Saudi Arabia after the two countries finalized a prisoner transfer treaty. The treaty to repatriate over 2,000 Pakistanis jailed in the kingdom was signed during PM Khan’s visit to the kingdom last year.

Meanwhile, PM also commended the leadership role of the Custodian of the Two Holy Mosques King Salman bin Abdulaziz Al Saud in promoting Islamic unity and acknowledged the endeavours of the kingdom of Saudi Arabia for peace and security in the region and beyond, per the PMO statement.

Prince Abdulaziz bin Saud bin Naif conveyed the cordial greetings of the Saudi crown prince to the Prime Minister and reaffirmed close fraternal relations between Pakistan and Saudi Arabia. Saudi Minister also hailed the positive contribution of Pakistanis in the development of the kingdom and reiterated the resolve to work closely with the Pakistan side on all matters relating to his ministry.

Later, the visiting dignitary along with the delegation also met with his Pakistani counterpart, Sheikh Rashid, and President Dr Arif Alvi.

A statement issued by the military media wing said the Saudi minister lauds Islamabad’s role in the Afghan situation. “Pakistan values its historical and brotherly relations with Saudi Arabia and acknowledges its unique place in the Islamic world”, Gen Bajwa was quoted by the Inter-Services Public Relations (ISPR).

COAS Bajwa said that Pakistan values its historical and brotherly relations with the Kingdom and acknowledges its unique place in the Islamic world.

During the meeting, matters of mutual interest, regional security, the current situation in Afghanistan and bilateral defence relations between the two countries were discussed. Both sides also pledged to play their part for further improvement in all kinds of cooperation.