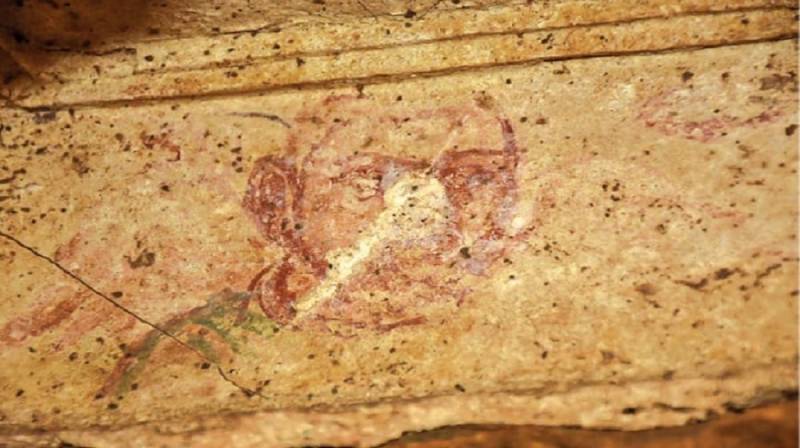 The discovery of the 1st century intact murals from the Buddhist site in Swat is a revolutionary achievement in the history of the Gandhara civilization in Pakistan.

According to the archaeologists, the discovery was a breakthrough in Buddhist archaeology and has immense importance.

The leader of the project, Saqib Raza, said, “We have discovered some rare fresco paintings belonging to the first century from the Abbasahib-China Buddhist site in Barikot during our recent exactions. The paintings are in different poses including the namaskar pose. Six of them are visible and intact”. ------------------------------

The director of archaeology and museums, Dr. Abdul Samad, said that the discovery of the murals is a landmark achievement because for the first time the archaeologists confirmed finding intact fresco paintings at an archaeological site of the Kushan dynasty in the Gandhara civilization.

“It showed that about 2000 years ago, residents of this area were using the fresco painting techniques. Thanks to the archeologists that they discovered the murals intact. There is no other example here in Gandhara of finding intact paintings,” he added.

Dr. Samad explained that usually, the archaeologists develop the dating on artifacts on the stylistic basis in Buddhist sites, however, for the first time, the dating of the site was conducted on the basis of artifacts, coins, inscriptions, and paintings which were discovered during the scientific excavation of the site.

The director of the Italian archaeological mission in Pakistan, Prof Luca M Olivieri, said, “We believe that Swat and Gandhara had an important painting school whose traces have unfortunately faded away. The new wonderful evidence has now been documented at Abbasaheb-China, thanks to director of archaeology and museums, Dr. Abdul Samad, to whom our gratitude and admiration go”.