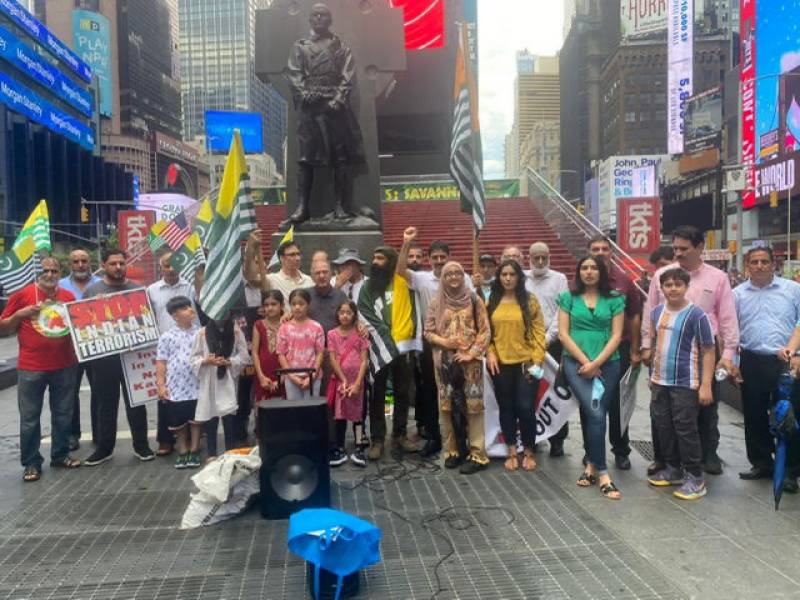 Kashmiri Americans along with friends of Kashmir staged a huge rally at historic Times Square, despite heavy rain, to commemorate the abrogation of Article 370 & 35 A and subsequent enactment of Domicile Law by RSS led Modi government in India.

The participants including women and children condemned the Indian government's attempts at changing the demographic status of Jammu & Kashmir by introducing politically motivated laws.

They also condemned the life imprisonment sentence of Indian special court in New Delhi against Muhammad Yasin Malik, one of the most prominent leaders of Kashmir, Chairman of Jammu Kashmir Liberation Front.

The participants were demanding United Nations to assured the right to self-determination of the people of Jammu and Kashmir.

The protest rally was initiated by JKLF, North America and endorsed by all political, civil and social organizations.

Sardar Haleem Khan, Chief Organizer of the rally and President, JKLF, North America said that the abrogation of Article 370 and 35A was in violation of all United Nations Security Council resolutions.

They appealed United Nations Secretary General to persuade India to rescind all these illegal and unconstitutional laws without delay.