French Presidential Elections race over
7 May, 2017 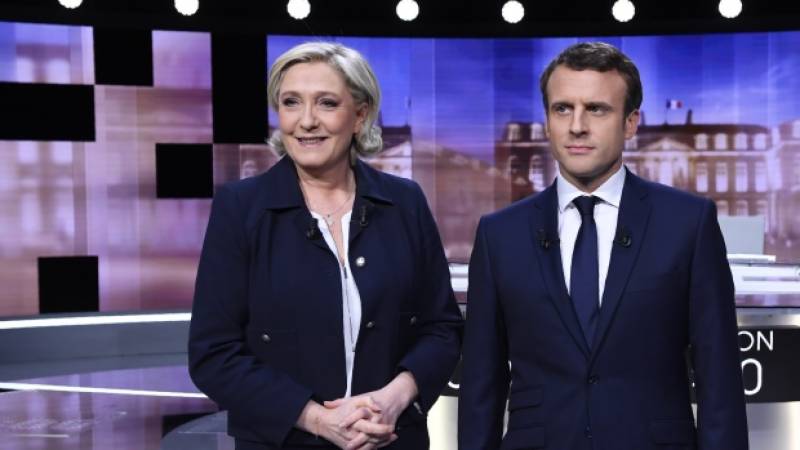 PARIS: France went to the polls Sunday to choose between centrist Emmanuel Macron and far-right leader Marine Le Pen for president, in a watershed election marked by falling turnout after an extremely divisive campaign.

The vote, seen as crucial for Europe´s future, caps a rollercoaster race marked by mudslinging, scandals and a last-minute hacking attack targeting Macron, a 39-year-old former banker who has never held elected office.

Turnout at 1500 GMT stood at 65.30 percent, 6.6 points down on the 2012 presidential election and about four points lower than the April 23 first round, data from the interior ministry showed.

Le Pen, 48, has portrayed the ballot as a contest between "globalists" such as Macron, who back free trade and immigration, and "patriots" who defend national borders and identities.

She is hoping to spring a shock win that would resonate as widely as Britain´s decision to withdraw from the European Union or the unexpected victory of US President Donald Trump.

Macron, who topped the first round of the election on April 23, is the runaway favourite however, with polls giving him a lead of more than 20 points over Le Pen.Most polling stations close at 1700 GMT, but those in big cities will stay open an hour longer. First estimated results will be published at 1800 GMT.

Le Pen cast a ballot in her northern stronghold of Henin-Beaumont, where bare-breasted Femen activists climbed scaffolding on a church and unfurled a banner reading: "Power for Marine, despair for Marianne," referring to the symbol of France.

Macron and his wife Brigitte voted in the northern seaside resort of Le Touquet where they have a holiday home.

Both candidates later travelled to Paris to see in the results.

"The world is watching," said 32-year-old marketing worker Marie Piot as she voted in a working-class part of northwest Paris.

"After Brexit and Trump, it´s as if we are the last bastion of the Enlightenment," she said.

In a sign of the security jitters caused by a string of jihadist attacks since 2015, the square outside the Louvre Museum, where Macron will hold a victory party if elected, was evacuated on Sunday afternoon.

A spokesman for Macron´s En Marche (On The Move) movement said a suspicious package had been found.

Outgoing Socialist President Francois Hollande, who decided in December against seeking re-election, cast his ballot in his former electoral fiefdom of Tulle, in central France.

Hollande, who plucked Macron from virtual obscurity to name him economy minister in 2014, said voting "is always an important, significant act, heavy with consequences".

The last polls before the vote showed Macron extending his lead to around 62 percent to 38 percent over Le Pen after a bruising TV debate in which Macron was seen as the hands-down winner.

The hacking of his campaign was revealed on Friday evening. Paris prosecutors are investigating the attack, a source close to the case said Sunday.

Hundreds of thousands of emails and documents were dumped online and then spread by anti-secrecy group WikiLeaks, in what the candidate called an attempt at "democratic destabilisation".

France´s election authority said publishing the documents could be a criminal offence, a warning heeded by traditional media organisations.

Whoever wins Sunday´s vote, it is set to cause profound change for France, the world´s sixth-biggest economy, a permanent member of the UN Security Council and a global military power.

It is the first time neither of the country´s traditional parties has a candidate in the final round of the presidential election under the modern French republic, founded in 1958.

Macron would be France´s youngest-ever president and was a virtual unknown before his two-year stint as economy minister, the launchpad for his presidential bid.

He left the Socialist government in August and formed his movement that he says is neither of the left nor the right and which has attracted 250,000 members.

Macron campaigned on pledges to ease labour laws, boost education in deprived areas and extend new protections to the self-employed.

National Front leader Le Pen sees herself as part of the same backlash against globalisation that has emerged as a powerful theme in the United States and in recent elections in Britain, Austria and The Netherlands.

She has pledged to organise a referendum on withdrawing France from the EU and wants to scrap the euro, which she has dubbed a "currency of bankers".

Le Pen has also vowed to reduce net immigration to 10,000 people a year, crack down on outsourcing by multinationals, lower the retirement age and introduce hardline measures to tackle Islamist extremists.