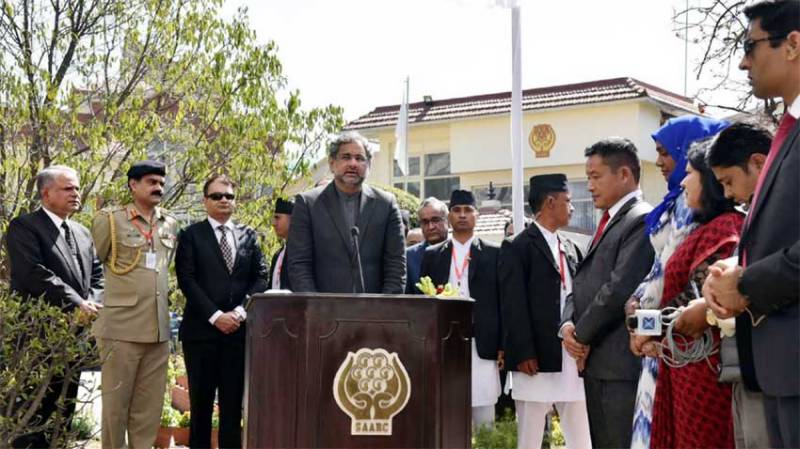 ISLAMABAD:Prime Minister Shahid Khaqan Abbasi says secure and peaceful environment in South Asia is crucial for development of the region's economy and for its prosperity.

Speaking during his visit to SAARC Secretariat in Kathmandu today (Tuesday) the Prime Minister said Pakistan attaches great importance to SAARC and remains committed to the principles and objectives of its charter.

He said, as a founding member, Pakistan has played important role in efforts aimed at realizing objectives of the organization.

He said Pakistan always strived to make SAARC an important vehicle for regional cooperation based on principle of sovereign equality.

The Prime Minister said SAARC has immense potential for strengthening economies of member countries and to promote collaboration in various areas of mutual significance. He said SAARC should continue to strive for achieving economic, cultural and social growth of the region.

Prime Minister Abbasi said connectivity is very important issue today and SAARC can play a great role in connectivity for the region.

He said as host of next SAARC summit, Pakistan looks forward to convening the moot at an early date. He assured that Pakistan will play a positive role in further strengthening regional cooperation.

Later, the Prime Minister planted a sapling of Pine at the premises SAARC Secretariat.

Talking to Secretary General of SAARC Amjad Hussain B. Sial in Kathmandu, he said Pakistan is committed to play a constructive role in SAARC.

He emphasized that SAARC believed in sovereignty of its member nations and is beneficial in making way forward for peace, stability and progress in the region.

Amjad Hussain updated the Prime Minister on the recent initiatives of SAARC.

Meanwhile, talking to a delegation of CEOs and editors from Nepal's leading national dailies and television channels in Kathmandu, Prime Minister said Pakistan's high economic growth rate and progress is the result of political stability and democracy in the country.

The editors showed keen interest in learning about progress on China Pakistan Economic Corridor since Nepal had also joined One Belt-One Road project in 2016.

The Prime Minister said participation of Nepal in OBOR would usher in a new era of prosperity for the country.

The Prime Minister shared with editors the success of Pakistan in war against terrorism and apprised them that peace had been restored in all cities including Karachi.

The media representatives shared the state of media in Nepal, which had undergone a massive change with transition of democracy in the country.

Prime Minister said media in Pakistan is quite dynamic and vibrant as democratic norms in the country ensured its independence.

On the other hand, Prime Minister Shahid Khaqan Abbassi has left for homeland after completing his visit to Nepal.

He was paid farewell by Nepalese Finance Minister, Youbaraj Khatiwada at the Kathmandu airport.APP/AFP