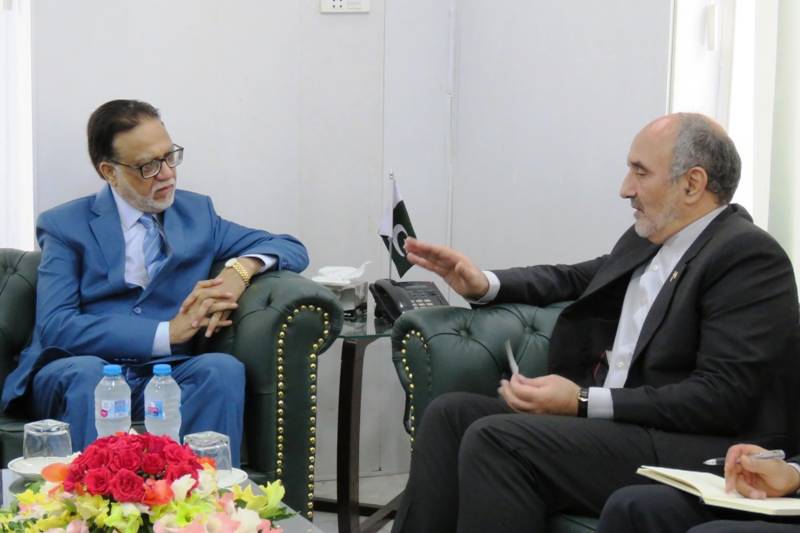 ISLAMABAD - Ambassador of Iran to Pakistan Mehdi Honardoost has called for expansion of media cooperation between Iran and Pakistan, adding that it would also help in strengthening bilateral ties.

The ambassador at a meeting with Managing Director of the Associated Press of Pakistan (APP) Masood Malik here said that Western media is trying to portray a dark image of Islam but Iran and Pakistan being two important Muslim states could join hands to counter anti-Islam western propaganda.

“We have to cooperate in the field of media. If we do it today it is better than tomorrow,” said the diplomat.

He said: 'We need more media cooperation adding that Iranian cinema and TV channels are producing quality programs according to the values of Islam.' T he envoy said the high authorities and the leaders of Iran and Pakistan understand each other better than the past, adding that the interaction between the two sides is really good and better than the past but 'we have to do a lot more.'

He noted that some big powers are pursuing a bullying approach towards Third World countries especially against Pakistan, against Iran, Afghanistan and some other countries.

The diplomat was of the view that as two important and big members of the Islamic family, Iran and Pakistan have the responsibility to counter this challenge.

“We should try the best, better than the past. We cannot leave our interests to the mercy of West,” noted Mehdi Honardoost.

He said Iran and Pakistan as two brotherly countries should come together to solve the issues of the region and also in the world.

He went on to say that relations between Iran and Pakistan are moving forward in all spheres. He said unfortunately the news coming in Pakistan about Iran through Western media are biased.

“Everybody knows that due to strained relations between Iran and the US nobody is optimistic about the future of the relations between the two countries so you cannot rely on Western media reports about Iran,” the ambassador said.

He said Iran and Pakistan have lots of achievements as far as their relations are concerned but the people of the two countries are not aware about these positive developments. “Previously our bilateral trade volume stood at 600 million dollars which is now standing at 1.3 billion dollars despite lack of banking transactions,” he said.

He said: 'We should not give ground to our common enemies to laugh at us. Pakistan is not a foreign country for Iranian people, it lies in our hearts.'

“When Supreme Leader talks about Pakistan he addresses Pakistan as dear Pakistan which comes out of his heart,” added Mehdi Honardoost. He said that Iran and Pakistan have excellent potential of cooperation in many areas.

Managing Director of the Associated Press of Pakistan (APP) Masood Malik expressing his views said: 'We feel that Iran is our next home and it is always close to our hearat and there are so many commonalities between the two countries.

He said 'There is no doubt whenever there is any trouble in Pakistan, Iranian people and government, always extended great help to us to which we are very thankful.'

He viewed that there is a great need to evolve a system of news exchange or media communication among Muslim countries.

“We had a conference in Islamabad in which we also invited the Iranian friends to enhance cooperation among the Muslim countries in media,” he said. The MD APP went on to say that non-Muslim media always distort the stories about the Islamic world and portray negative image of the Muslims.

“So there is a need to rectify this propaganda. Here the role of news agencies is very important, if APP and IRNA make some arrangement of mutual cooperation it would be very helpful in this regards and we are already working on that,” said Masood Malik.

He said: 'I would try my level best to finalize agreement between IRNA and APP and we are also working to expand the operations of the APP and in all those facilities IRNA will be our partner so we are ready to extend all kinds of cooperation to IRNA. IRNA is just like our right hand,” he said.

He further said that APP is going to launch a TV channel soon and Iranian embassy should provide Iranian documentaries and feature films dubbed in Urdu and the channel will air them in its test transmission.

“APP is fully ready to cooperate with Iranian news agencies especially IRNA and we would also like to have exchange of media delegations with Iran,” he said.

“We will also create a portal on our website with all news about Iran over there so it would be good opening for the Iranian media to the people of Pakistan,” added Malik.