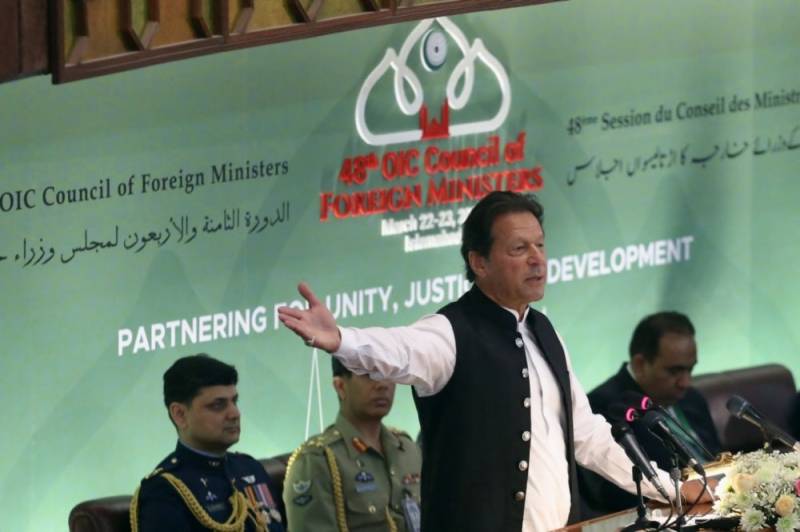 The strategic positioning of the recently concluded forty-eighth Organization of Islamic Conference (OIC) summit link has been significantly different from its predecessors. It was meant to enhance the strategic relations between China and Muslim world in a time of global geopolitical uncertainty and shifting political alliances. It can potentially usher in a new era of economic partnerships, political connectivity, and conflict resolution in a region marred by foreign-funded wars which have killed millions of people and ravaged entire nations economically and socially.

Pakistan straddles the meeting point between the Muslim world and China, two of the greatest human civilizations. Although the country has a checkered political history and again is in the midst of a deep political crisis link, it does not change the macro geostrategic dynamics. Before discussing what Pakistan stands to gain out of strategic connectivity between China and OIC, we need to understand two key factors. Firstly, China has put billions link of dollars into the China Pakistan Economic Corridor (CPEC), the most extensive leg of its flagship Belt and Road Initiative (BRI). China is relying heavily on the successful completion of its CPEC projects which would significantly impact the overall realization of its BRI dream.

Secondly, the role of Pakistan’s military establishment can not be overemphasized link, which has always positioned itself as a guardian of the country’s strategic relations with the United States link, the Middle East, China, and the rest of the world. Although it may sound politically dystopic, it brings continuity and steady progress in some of the most strategic initiatives from the perspective of Pakistan’s national interest. The most important of them has been the nuclear program link, which reached fruition and has been safeguarded at all costs despite the severe political upheaval the country endured many times during its development.

We now come to what Pakistan has to strategically gain by augmenting the relations between China and OIC. Pakistan and China have a common nemesis, India link. India has invested heavily in its relations with the Muslim world from Afghanistan to the Middle East through its financial muscle, cultural outreach, and the millions of Indians who work in oil-rich Gulf countries. Although Pakistan has deep roots with Gulf countries through its military relations and the Pakistani diaspora, it has been outweighed by India on several fronts due to multiple factors. The joint Pakistan-China push into the Muslim world can change these dynamics. With China investing heavily in different parts of the Muslim world and Pakistan being its key strategic partner and conduit to them, this can create deep long-term penetration of the Middle East and beyond link .

Geographically, Pakistan is the bridge between China and the Muslim world. Pakistan is the starting point of a vast, contiguous Muslim landmass that stretches up to Morocco and includes the geostrategic regions of Central Asia, Near East, Middle East, North and Central Africa. This gives China uninterrupted access to some of the most vital countries for its BRI project, i.e., mineral-rich Afghanistan, the gateway to Central Asia which needs to be rebuilt link post-American withdrawal. Another important country is Oman, where China has heavily invested in the strategic port of Duqm link in the Arabian Sea. It creates a long shipping corridor from South Asia to East Africa dotted by Chinese-controlled ports linked to the road network of CPEC, which connects Western China to the rest of the world.

Once the BRI projects are completed and CPEC becomes more pivotal, Pakistan could have tremendous economic advantages as a trade corridor, a principal shipping port, and from increased foreign investment. Once Pakistan’s economy integrates with various markets, it will automatically carry greater leverage at multilateral economic forums and overcome its perpetual current account deficit crisis, which has been its bane for an extended period of time, both financially and diplomatically.

The next strategic advantage that Pakistan can reap is cultural outreach. Culturally speaking, Pakistan has a lot in common with Arab, Iranian and Central Asian nations other than religion. But, while India has invested heavily link in creating deep cultural roots in these countries, mainly through its film industry, Pakistan has failed to make any substantial progress. With peace finally reaching Afghanistan and new trade routes opening up on multiple fronts, Pakistan can create deep cultural roots in the regional countries with the right strategy and investment. In addition to enhancing trade and political ties, it can generate massive tourism opportunities and generate much-needed foreign exchange revenues. As tourism increases in the post-Covid world and business flourishes due to regional connectivity, Pakistan will also be able to effectively communicate its viewpoint on many critical issues like Kashmir and Afghanistan across the region through public opinion building and diplomatic channels.

Another very critical element of the China-OIC relationship is conflict resolution. Many countries in the region, from Afghanistan to North and Central Africa, including countries like Yemen and Syria, have been completely destroyed by foreign-funded wars and are grappling with some of the worst humanitarian crises in recent history. Many of these countries can potentially be part of the BRI project. One of the fundamental reasons these conflicts have been raging with no end in sight is foreign interference and no regional country strong enough to carry out a resolution. China link can fill in this gap which would provide it with deep inroads into these countries and gain political, economic, and cultural influence. This can change the long-term dynamics of the Great Game as it intensifies after the Russian invasion of Ukraine, rekindling the ghastly memories of the Cold War era. Sustainable peace requires sustainable development. It is the first time after the fall of communism that a new superpower is entering the game to create a global logistics network and a vibrant market for its products. To secure its trillions of dollars worth of trade and investment, China will put all possible efforts to bring peace link and political stability to the region. This, in turn, creates a win-win situation for everyone.

All of the above creates a historic, once-in-a-generation opportunity for Pakistan, which has long suffered economically due to political instability, lack of strategic economic planning, and global arm-twisting from the International Monetary Fund and the Financial Action Task Force. Although Pakistani policymakers are currently embroiled in their own political adventures, they cannot afford to miss these opportunities. If they fail to act swiftly and strategically, other regional competitors could capitalize on this moment to their detriment.

*Noaman Abdul Majid is an Economist and Geopolitical Analyst based in the Middle East and Pakistan. He can be contacted at **namajid@thewixeman.com