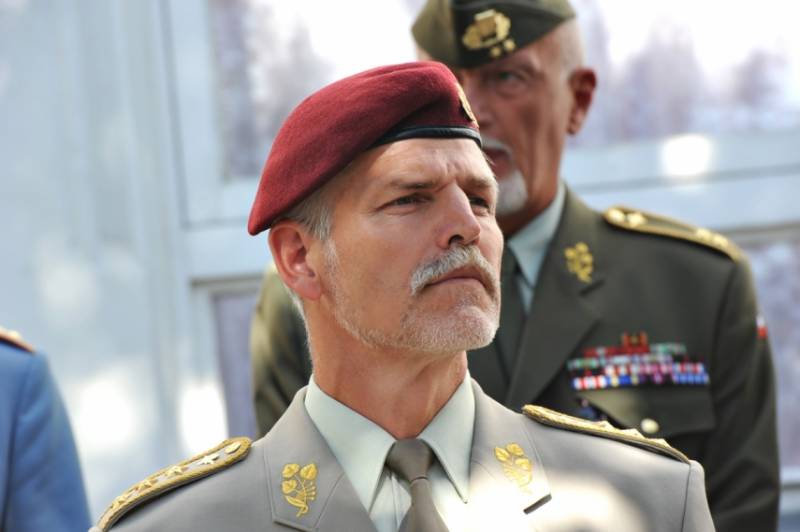 ISLAMABAD (APP): Chairman Military Committee NATO, General Peter Pavel, Thursday said the scale of counter-terrorism campaign by Pakistan was quite large with impressive results, and mentioned that the country had shown great progress against militancy in last couple of years.

According to a statement issued from the PM House here Thursday, General Peter Pavel in a meeting with Prime Minister Muhammad Nawaz Sharif here at PM House, termed Pakistan an important and traditional partner of NATO. The Chairman Military Committee NATO said by the virtue of its size, Pakistan could play an important role in the region.

Prime Minister Muhammad Nawaz Sharif said his government had a stated policy on Afghanistan, which he expressed from the day first on assumption of his office.

"We genuinely believe that stability in Afghanistan is crucial for achieving stability in our own country and the region," added the Prime Minister.

"I myself and the Chief of Army Staff visited Afghanistan and always assured them of our fullest cooperation to root out the menace of terrorism which is a common enemy for both the countries," emphasized the Prime Minister.

The Prime Minister said the Pakistani civil and military leadership were in touch with Afghani leadership and had beenfacilitating the reconciliation process on the request of Afghan government.

"We believe that the an Afghan led and Afghan owned reconciliation process is vital for achieving long term peace and stability in Afghanistan," the Prime Minister said.

General Peter Pavel said his meetings with all the services Chiefs and others were highly satisfactory.

"I am highly impressed with the state of affairs, professional standards and approach of Pakistan Armed forces. I would like to acknowledge the comprehensive counter terrorism strategy which has achieved a lot and there are many lessons for NATO to learn from it," Chairman Military Committee NATO said.

The Prime Minister said that India was creating problems and has resorted to double standards on the issue of Indian occupied Kashmir.

The Prime Minster said that India unfairly blamed Pakistan for Uri attack without investigating into the incident.

"India does not realise that the youth of IoK have re- energized the freedom struggle. We want peaceful relations with all of our neighbours. Pakistan would continue to extend moral, diplomatic and political support to the Kashmir cause.

The atrocities by the Indian forces have resulted into the loss of precious human lives and blinded hundreds through the use of brutal force," the Prime Minister said.

The Pakistani armed forces had rendered matchless sacrifices in the war against terrorism, he said. This war is immensely backed by the entire nation, government and political leadership of our country to guarantee a peaceful homeland for our future generations, he added.

"The ongoing military operation Zarb-i-Azb is the largest military counter terrorism offensive by any single country, which has broken the backbone of terrorists," the Prime Minister emphasized.

On the issue of eastern border, General Peter Pavel said that the world and the UN have to be consistent on principles and rules.

"I have listened to your yesterday's speech in the Parliament where you eloquently expressed the issue of Kashmir. The Kashmir issue has to be addressed as two nuclear powers are party to it and the world cannot remain indifferent and must be concerned," Chairman Military Committee NATO said.