Any aggression will not be allowed to go unpunished: COAS
6 Oct, 2016 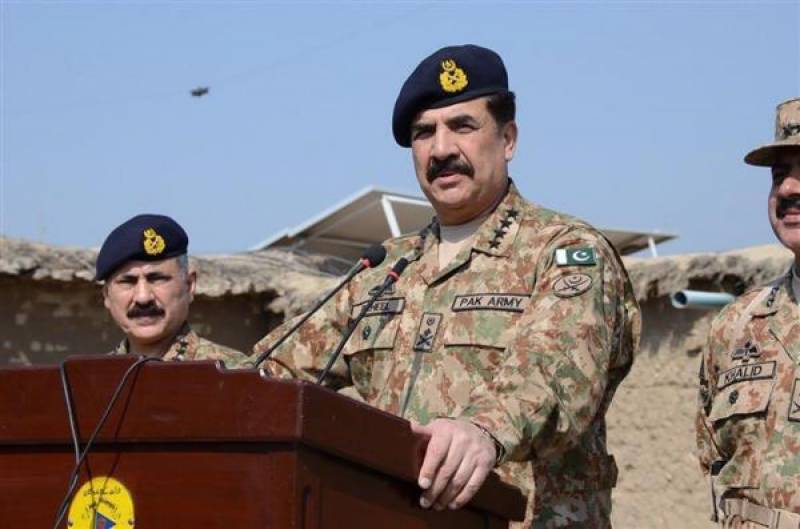 ISLAMABAD (APP): Chief of Army Staff (COAS) General Raheel Sharif on Thursday made it clear that any aggression will not go unpunished and will be met with the most befitting response.

"Any aggression, born out of deliberate intent or even a strategic miscalculation, will not be allowed to go unpunished and will be met with the most befitting response," he said while addressing passing out parade of Pakistan Air Force (PAF) cadets at Risalpur.

"We will be highly relentless in defending our motherland against entire spectrum of threat", he said.

The COAS said, while Pakistan wants good relations with all its neighbors, no one should make any mistakes about our collective resolve to defend our motherland.

"We have recently witnessed an unfortunate display of utter desperation playing out inside (Indian) Occupied Kashmir and along Line of Control through a litany of falsehoods and distortion of facts by India," he said.

"We expect international community to condemn Indian insinuations and fabrications about a nation that has made unparalleled contributions in the global fight against terrorism," he added.

Expressing full confidence, he said with the united national resolve and its armed forces, those inimical to regional peace will not be allowed to succeed. "Their evil plots and plans will be defeated, Inshallah."

Pakistan is a responsible country and remains committed to follow the policy of friendship with all other countries based on the principles of equality and mutual respect, the COAS said, and added while doing so, the armed forces of Pakistan remain fully prepared to give the most befitting response to any kind of internal and external threat posed to the nation.

Towards the internal front, he said, Operation Zarb-e-Azb, with full support from Pakistan Air Force, has successfully turned the tide against terrorism. "It's role has been crucial in achieving our objectives to root out the menace of terrorism."

Any misadventure by adversary will meet the befitting response: COAS

He said the exemplary synergy and cooperation between the services, leading the armed forces to stability in a short time, is unique in this type of warfare. "It is a value which we must all cherish, and carry forward, with even deeper commitment in the future."

"Today we have achieved phenomenal success in uprooting the terrorist infrastructure from our soil. For sustainable peace, we are now engaged in eliminating the residual threat in the form of facilitator and their sympathizers through intelligence based and combing operations all across the country,' he added.

The enemies of Pakistan's peace and prosperity have been distressed by the sight of the successes, he said and added these enemies will now attempt to accelerate their

efforts to reverse the gains and derail the progress through direct and indirect strategy.

"Their nefarious designs will not be allowed to succeed at any cost. Resolute efforts to consolidate our gains is the only way forward for which we will not leave any stone unturned."

The COAS termed it as great honour for him to review the Passing Out Parade of combined courses of College of Flying Training and Aeronautical Engineering.

Felicitating the graduating cadets, he said "grant of commission from this renowned institution is a singular honour, and you have indeed proved worthy of achieving this distinguished milestone.

"PAF rightly takes pride in its unmatched mix of high-end technology with quality human resource and continuous force up-gradation for ensuring its fighting potential. It is indeed, satisfying that PAF is vigorously pursuing the force goals to retain its cutting edge."

Referring to the ongoing Exercise High Mark by PAF, the COAS said, it is a vivid demonstration of PAF's preparedness for war and its capability to optimize the available resources through imaginative planning and effective execution.