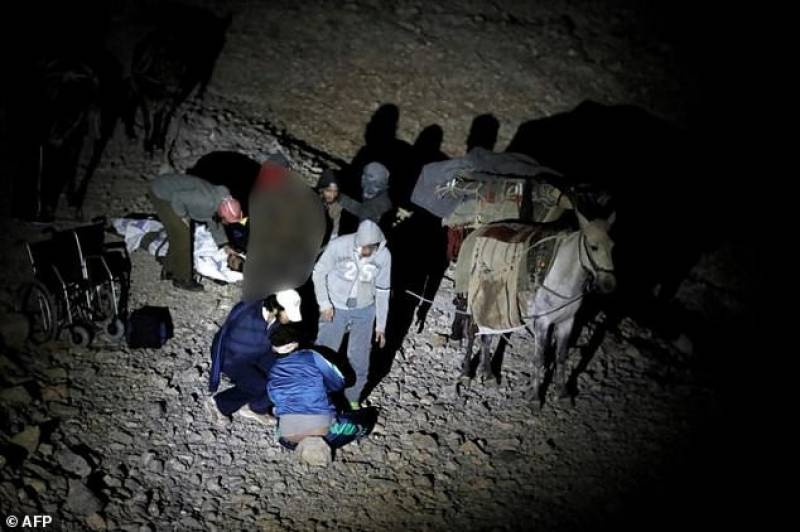 Mount Hermon: The wounded Syrians, carried on donkeys through the pitch-black night, could be seen in the beam of a searchlight held by their unlikely saviours -- Israeli soldiers.

They were high in the mountains, nearing the Israeli-occupied zone of the Golan Heights, where they were to receive medical treatment for their wounds even though Israel and Syria are officially at war.

Casualties from Syria's six-year civil war are taken to hospitals inside Israel several nights each week.

At the same time, Israeli soldiers return Syrians, who have received treatment, to the disengagement line that divides the Syrian-controlled part of the Golan from that ruled by Israel.

It is another example of the many contradictions in the morass of the six-year Syrian conflict.

Israel does not take in refugees from the war, but its army says that it has facilitated the treatment of more than 3,100 wounded in Israeli hospitals since 2013.                  The army acknowledges they treat any Syrian who needs it, including civilians or even rebels fighting President Bashar al-Assad's regime.

On a recent night, a procession of five patients made its way along Mount Hermon, known as Jabal al-Sheikh in Arabic and the highest point of the Golan Heights, avoiding gunfire between warring groups on the Syrian side.

They arrive with assorted fractures and shrapnel wounds.

"They know that there are specific places which they can reach and where we wait for them," says Tomer Kolar, the Israeli army's chief medical officer for the sector.

"There is no ambulance on the other side. Sometimes they arrive in the back of a truck or by car, but on the Hermon they come with donkeys. When they arrive in the middle of winter, in the snow, they are sometimes in an extremely serious condition."

Nearly two-thirds of wounded Syrians are taken to the Galilee Medical Centre in Nahariya, on Israel's coast near the border with Lebanon.

A hospital wing, located in the basement, has been set aside for the men and is under permanent watch while wounded women and children are placed in other departments.

Inside the men's unit, patients rest and watch television.

One of them is Hani, 28, who had part of his face shattered by gunfire during an offensive on his village by Assad's forces. He speaks on condition of anonymity for fear or reprisals when he returns home.

Hospitalised in Nahariya for more than a year, Hani lost an eye and underwent multiple operations.

Sameh, 31, who arrived at the hospital three weeks ago, had an arm amputated after being wounded in fighting against Assad's army.

"When I'm healed, I'll fight back against Assad," he said without hesitation through a Arab Israeli nurse who translated for him.

"The Syrian government always told us that Israel is an enemy country and that it is better to be in touch with the devil than with Israelis.

"But I am grateful to Israel and the Israeli army for what they have done for me."

Israel has found itself in a complex position regarding the Syrian war.

It wants to avoid being dragged into the conflict, but acknowledges carrying out dozens of air strikes there to stop what it says are advanced arms deliveries to Hezbollah.

Israel also monitors closely the ebb and flow of forces on the Syrian side of the Golan Heights.

The area just to Israel's northeast is among the last bastions of rebels fighting Assad and his allies. Sunni jihadist groups are also present there.

Israel says it does not back the rebels, but the treatment of war wounded has led to tensions with its minority Druze population.

Druze located on the Israeli-controlled side of the Golan have relatives across the fence allied to Assad's regime.

On Friday, after militants launched an assault on the village of Hader in the Syrian Golan, Druze residents on the Israeli side of the plateau rallied along the buffer zone seeking to cross over and help.

Around 10 of them entered the buffer zone, the Israeli army said, before forces caught them and returned them.

Apparently seeking to reassure the Druze population, Israel's army issued a rare pledge of protection for the village controlled by Assad's forces.

In 2015, Druze carried out two attacks on Israeli military vehicles transporting injured Syrians to hospital, killing one of the wounded.

Kolar, the Israeli medical officer, thinks most of the Syrians treated by Israel are civilians wounded by the fighting, but adds that "it is possible there are also rebels" among them.

Israel has "tactical interests -- ensuring the peace of its border in the Golan by helping civilians and combatants on the Syrian side," said Karmon.

It also has a strategic goal of not allowing a power vacuum to develop in currently rebel-held areas which serve as a "buffer zone that insulates Israel from Karmon present in southern Syria", he said.