Kashmir Council Europe to launch new initiative against India
6 May, 2019 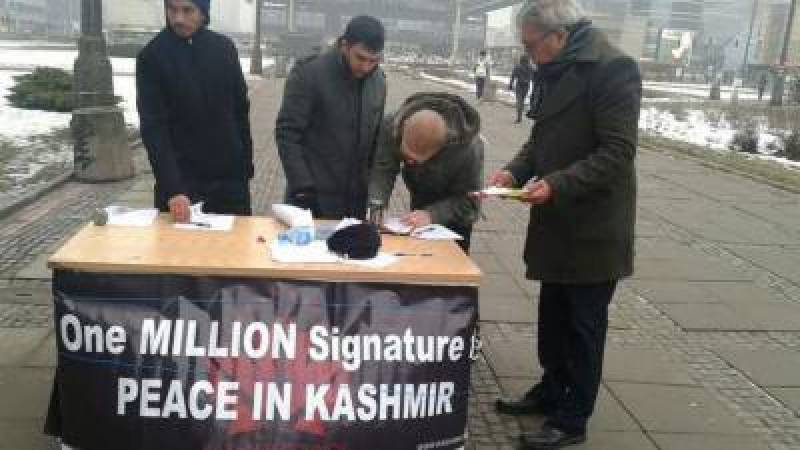 MIRPUR (AJK) - Kashmir Council Europe is going to hold ‘Signature’s camp on Kashmir’ in Ireland, it was officially said on Sunday.

The (KC-EU)’s team will arrive in Dublin, the Capital of Ireland, in connection with the widespread awareness movement on Kashmir’s issue titled ‘One Million Signature Campaign’, the Kashmir Council European Union Chairman Ali Raza Syed told APP over telephone from Brussels on Sunday. The team will collect signature from the Irish people in favour of oppressed people of Kashmir during the two-day signature camp on Monday and Tuesday in the capital city, he said. The EU based campaign had been first launched in Belgium a few years ago and so far, a large number the people in the different European countries have signed the documents of the signature drive. Local NGOs and social activists based in different European countries have supported the motivation of move and held camps in the context in the host countries. Ahead the scheduled signature camp in Dublin, Chairman Kashmir Council EU Ali Raza Syed said that the Council had already organized successful camps in connection with the signature campaign in the different EU countries and a massive number of people showed their positive response in the context. It is important to mention that basic aim of the EU based signature drive is to collect a million signatures in order to highlight the conflict of Kashmir and pressurize New Delhi to stop the human rights abuses perpetrated by the Indian forces in the Indian held Kashmir (IHK). The collection of one million signatures will be presented in the shape of the document to the ‘European Parliament’s human rights committee’ in order to raise the issue of violations of human rights in IHK. Condemning the violations, Ali Raza Syed pointed out the issues related to killing of innocent people in extra judicial actions, illegal detention of youth and political leaders and enormous search operations against innocent masses by Indian security forces in the occupied territory. Ali Raza Syed urged International Community specially United Nation (UN) and EU to stop human rights abuses in IHK and take necessary steps for a suitable and peaceful resolution of Kashmir issue in accordance with wishes of people of Kashmir.