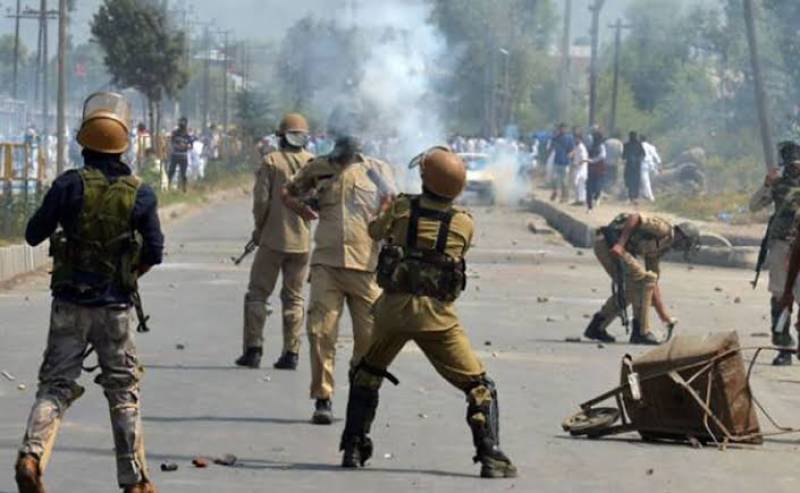 SRINAGAR - In occupied Kashmir, people held forceful demonstrations in different areas, today, to show their resentment against the Indian occupation and ongoing lockdown in the territory.

Indian police and troops used brute force against the protesters at many places, injuring several of them.

The occupation authorities did not allow people to offer Juma prayers at Jamia Masjid in Srinagar and other main mosques of the Kashmir Valley on the 18th successive week since 5th August.

Meanwhile, the situation in territory particularly in the Kashmir Valley remained grim as the military lockdown continues on 124th day, on Friday.

The residents of the Valley continue to suffer immensely due to imposition of restrictions under section 144 and suspension of internet and prepaid mobile phone services.

The Jammu and Kashmir Youth League in handbills and brochures pasted on walls in the occupied territory issued a protest calendar urging people to conduct a march towards Dastagir Sahib in Srinagar, tomorrow.

It asked the masses to conduct similar march towards the UN office in Srinagar on Monday, observe complete blackout on Wednesday evening and impose civil curfew on Thursday.

The Islamabad-based Independent Urdu, which is the Urdu edition of UK’s online newspaper, The Independent, in an article reveals that the incidents of molestation of women are increasing and the actual number of these incidents is much higher than those reported.

The article maintains that Indian soldiers use rape as a weapon to suppress the resolve of the people of occupied Kashmir.

The article, quoting a Kashmiri journalist, says that Indian soldiers barge into the residential houses at any hour of the day or night and ask about women, especially about young daughters and sisters.

The Acting Chairman of Jammu and Kashmir Liberation Front, Abdul Hameed Butt, in a memorandum addressed to the UN Secretary General, Antonio Guterres, asked him to take steps for saving the party Chairman, Muhammad Yasin Malik, who faces a serious threat to his life in New Delhi’s Tihar Jail, and ending escalation between Pakistan and India at the Line of Control.

Meanwhile, Kashmir Chambers of Commerce and Industry has said, economy of the territory has suffered losses of one hundred and fifty (150) billion rupees since August 5 due to continued lockdown and internet blockade imposed by India.

The KCCI President, Sheikh Ashiq Hussain, in an interview in Srinagar said, this is just a conservative estimate and they will be coming up with a comprehensive data about the losses within a week.

He said that every sector of business has been hit after the clampdown and internet ban in occupied Kashmir since August 5th.

He said handicraft, tourism, IT industry, e-commerce sectors and carpet industry were the worst hit.

He said businesses have witnessed huge losses and all sort of activities have come down in the Valley.

He said, the hotel and restaurant industry has seen more than 30,000 people losing their jobs.

The e-commerce sector, which includes courier services for purchases made online, has seen 10,000 people losing their jobs.

Sheikh Ashiq Hussain said there are no orders because the traders don’t have any access to the internet.

Many new businesses especially start-ups are completely dependent on social media but they have not been able to access it due to the communications gag.

The KCCI President said that many members of the trade community in occupied Kashmir had been detained.

Four months have passed and they have-not been released yet.