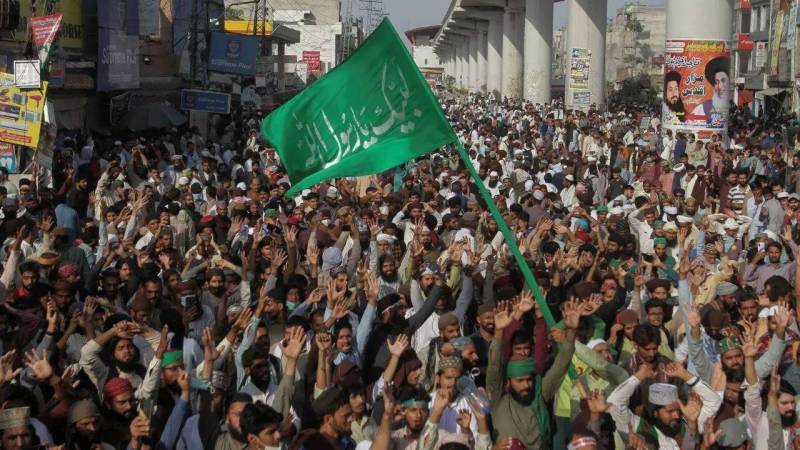 LAHORE – The cabinet of Punjab Chief Minister Usman Buzdar has approved a summary to revoke the proscribed status of the Tehreek-i-Labbaik Pakistan (TLP), said media reports on Thursday.

The summary, which was sent by the Home Department, was approved through circulation after the chief minister granted initial approval for it.

The matter to end the proscribed status of the party will now be sent to the federal government.

The development comes after a secret agreement between the government and TLP following a protest by the banned outfit.

The recent development came amid secrecy about the details of the arrangement.

The PTI government had banned the religio-political party after its protests turned violent earlier in April, designated it a terrorist group, and arrested its chief Saad Rizvi.

In compliance with a secret accord, the government in the country’s most populous province has decided to remove the names of around a hundred activists of the proscribed party from the Fourth Schedule. The decision was taken during a meeting chaired by Punjab Law Minister in the provincial capital. Officials also decided to release TLP activists from different jails.

Earlier, a senior TLP leader said the government had released over 1,000 supporters and would free more than 1,000 as well as drop all criminal charges against them under the ‘peace agreement’.

Speaking on a television show, he said government representatives told TLP members that they should join mainstream politics and become a major political party in the South Asian country, he said while adding that TLP has a major following.

On the other hand, Interior Minister Sheikh Rashid, speaking from a presser, said that TLP chief Saad Rizvi insisted on the closure of the French embassy in his talks with the interior minister – contrary to what Mufti Muneeb and other members said earlier.

However, he refused to share further details as according to him Prime Minister Imran Khan instructed only one minister to speak on the TLP issue to avoid disputed version.

The comments of the key government member came after former Ruet Chairman Mufti Muneebur Rehman said TLP never demanded the expulsion of the French envoy and the closure of the embassy.

The charged activists of the party also announced to march on the country’s federal capital, prompting the government to block the routes leading to Islamabad.

More than five law enforcement personnel embraced martyred and scores from both sides were injured in the recent events.