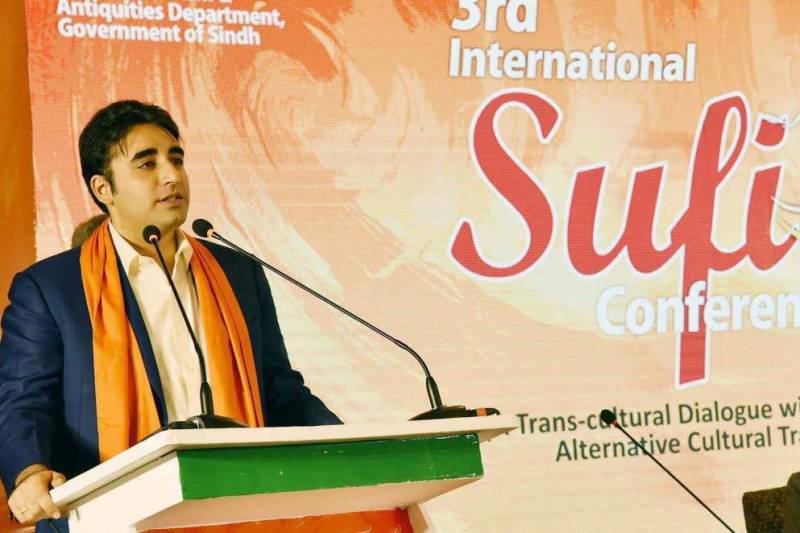 KARACHI: Chairman Pakistan Peoples Party Bilawal Bhutto Zardari has emphasised the significance of Sufism and maintained that as the world becomes increasingly polarized, today we need the Sufism, more than ever before.

We need that universal language of the mystic to unite us. To bridge the gap across religions, cultures and people. To remind us that at our very core, we are all one; we are all the same,' the PPP Chairman stated while addressing two-day International Sufi Conference organization by Sindh Culture Department here Friday.

Scholars on Sufism from 12 countries were invited to the Conference to share Sufi pearls with a carefully selected audience.

He welcomed the foreign scholars and other distinguished guests and added that when scholars of your stature and your beliefs sit together, and deliberate, it brings me great hope for the future of humanity,' he said.

He also congratulated Chief Minister, the Minister for Culture and their team for putting together this event, which is much needed at this time.

Centuries ago, it was the Sufis that spread Islam across the Indus valley. Through love and harmony, luminaries like Data Sahib, Rehman Baba, Bulleh Shah and their contemporaries strove tirelessly out of sheer devotion to the Deity. And their devotion inspired millions to embrace Islam.

'Today, sadly, extremism is worn like a badge of honour.

Those that lie, do so with impunity, peddling fear.

Their purpose is simple - to deceive enough people that they may establish a truth of their choosing.

Bilawal said that Sindh is known as the land of the Sufis. FromLal Shahbaz Qalander to Shah Abdul Latif Bhittai. From Sachal Sarmast to Shah Ina-yat. We are destined to stand up for the Truth and only the Truth.

Is it any surprise, that the Bhutto family hailed from this very land? When my mother, Mohtarma Benazir Bhutto Shaheed, raised the flag of the Truth, there were few who were willing to lend their voices to hers, and fewer still, who chose to stand beside her.

But she continued, undaunted - in the proud tradition of the Sufi, the torch-bearer of the Truth.

When barbarians attacked the shrine of Lal Shahbaz, they shook us all to the core.

It was then, that mere hours after suicide bombers blew themselves up at that beautiful, spiritual place, that one man decided he would not cower.

He got up and he rang the shrine's bell.And that bell, while it rang, served two purposes - first, it guided us out of the dark abyss into which we were spiraling, and second, it was the very death knell for every extremist that dared target pluralistic Pakistan.

Bilawal Bhutto Zardari urged the audience to deliberate just how we veered so far from the path of the Sufi, and whats the shortest and most effective way back. (APP)