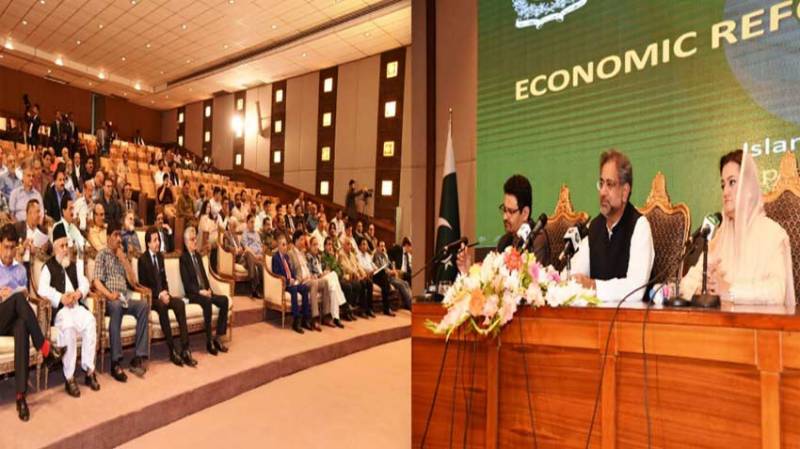 Addressing a news conference in Islamabad on Thursday, he said maximum rate of income tax is being reduced from the existing 30% to 15%.

Annual income of upto 1.2 million rupees would be exempt from the income tax.

There would be five percent income tax on income falling between 1.2 to 2.4 million rupees annually.

The Prime Minister said at present only 1.2 million people are filer income tax return out of a population of 207 million.

He said of 1.2 million filers, only seven hundred thousands are paying tax while others only filed returns and paid no income tax.

He said even those who are paying income tax include 90% whose tax is deducted at source.

Prime Minister Abbasi expressed the confidence that the substantial reduction in income tax rate would serve as incentive for people to pay tax.

He said Computerized National Identity Card number would now be the tax number of the citizens.

He said in this way 120 million card holders can become tax payer by filling a form.

Explaining details of the amnesty scheme, the Prime Minister said it would be one time incentive upto 30th of June this year to declare hidden assets inside and outside Pakistan.

He said five percent penalty would be imposed on cash or value of the local assets in Pakistan.

He said those wishing to repatriate cash from abroad can do so by paying a penalty of two percent.

Three percent penalty would be imposed on whitening of foreign assets.

He said one percent presumptive tax would be levied on property transactions.

He said if there is under-declaration of value then the government will have the option to buy the said property at 100% of the declared value.

He said all data bases would be merged to identify potential tax payers on the basis of foreign travels, financial transactions, utility bills and fees of children.

He said modern technology would be used to identify tax payers and those who are evading taxes.

To a question the Prime Minister said he discussed with the Chief Justice of Pakistan national issues and not personal matters.

He said Mian Nawaz Sharif never interfered in the official business of the Prime Minister.

To another question he said there is no loadshedding on sixty percent feeders of the country except the one necessitated by technical faults.

He said two to eight hour loadshedding is resorted to in 40% feeders from where excessive theft of electricity takes place.