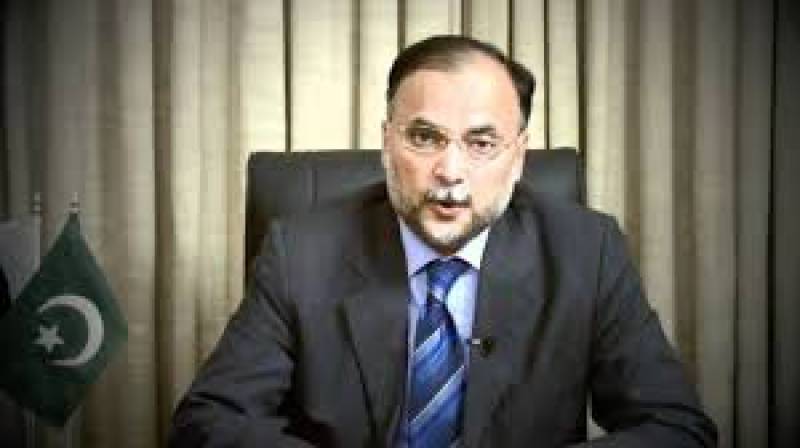 ISLAMABA: Minister for Interior Ahsan Iqbal Tuesday alleged that the Pakistan Tehreek-i-Insaf (PTI) and Sheikh Rasheed were running a campaign on social media to create mistrust among national institutions.

The PTI had failed to face the Pakistan Muslim League-Nawaz on the political front and were now trying to come into power through back door, but it would not succeed in its endeavour, he said talking to a private news channel.

The minister said the general election 2018 would be contested on the basis of performance. The PML-N government had been serving the people for the last four years without any corruption sacandal.

He said self-accountability was essential for a nation to move forward.

He said former prime minister Muhammad Nawaz Sharif was disqualified for having an 'Iqama'. After the decison of Supreme Court in the Panama Papers case, the country's stock exchange had suffered huge loss, he added.

To a question, the minister said the government could not make any amendment in the Constitution without the consesus of political parties.

Ahsan Iqbal said the Pakistani people had more potential than any country of the region and could perform in every field. Hwever, continuity of the systmen was vital for progress.

"The Parliament has done away with the dictatorial clauses in the Political Parties laws. This is another step towards strengthening democracy because strong democracy was imperative for strong defence," Ahsan Iqbal said.

He said the Supreme Court was protector of the country's law and Constitution and the PML-N always believed in rule of law.

Mentioning to unpopular amendments in the Constitution by dictators, he said a Musharraf like amendment was also made by General Ayub Khan to keep popular leaders away from politics, which was done away with by Zulfikar Ali Bhutto.

"Now, the present parliament has thrown away a discriminatory amendment introduced by Pervez Musharraf to keep away popular leaders from political arena," he said.

He said those criticizing the amendment must be ware that such black laws of dictatorial regimes bar popular leaders from politicking. "Today once again Nawaz Sharif is the party president and it was the will of the people to see him in active politics."