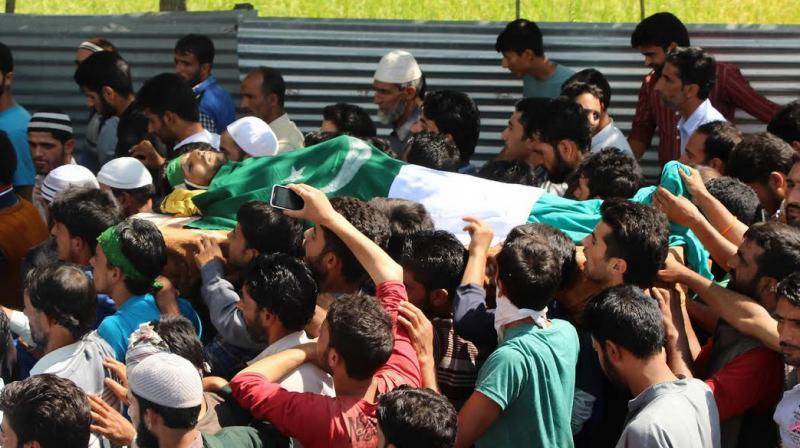 In occupied Kashmir, Indian troops in their fresh acts of state terrorism, have martyred eight Kashmiri youth in Srinagar, Kupwara and Baramulla districts.

The troops killed three youth during a siege and search operation in Srinagar, today. Five youth were killed in Tangdhar and Uri areas of Kupwara and Baramulla districts.

Earlier, one Indian Border Security Force man was killed and around six were injured after unidentified gunmen entered the Border Security Force camp near Srinagar Airport, early in the morning. Indian forces’ personnel sealed all the routes leading to the airport while flights were suspended. A constable of Indian police was also killed in an attack in Pulwama district.

The Chairman All Parties Hurriyat Conference, Syed Ali Gilani in a statement in Srinagar said that pro-India People’s Democratic Party headed by Mehbooba Mufti was serving as a pawn to facilitate fascist agenda of Hindu extremist Bharatiya Janata Party and Rashtriya Swayamsevak Sangh in Kashmir. He said that execution of the secret deal between BJP and RSS about the integration of Jammu and Kashmir with India was a very serious matter. The APHC Chairman deplored that shameless elements were planning to do away with the Muslim-majority status of the territory to remain in power.

The Human Rights Commission of the occupied territory has directed the authorities to shift illegally detained Dukhtaran-e-Millat Chairperson, Aasiya Andrabi and her associate Fehmeeda Sofi from Amphala jail in Jammu to Srinagar.