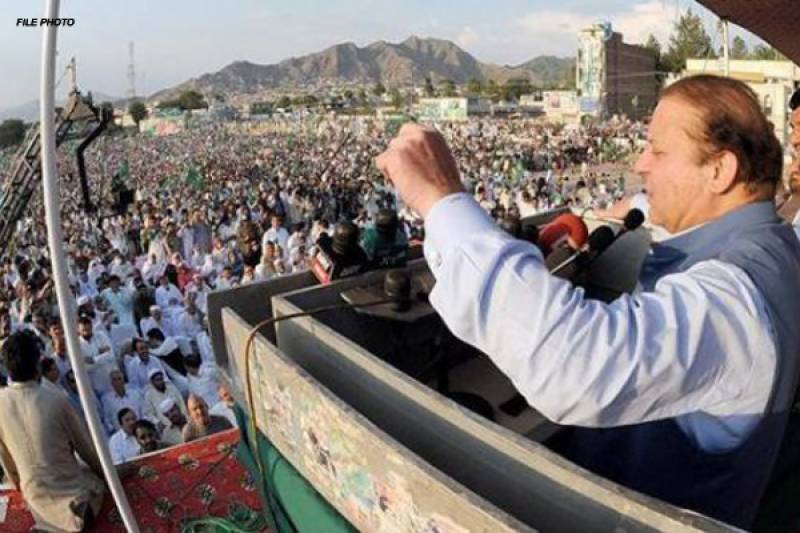 KAHUTA: (APP) Lashing out at his detractors, Prime Minister Muhammad Nawaz Sharif, Friday said people had rejected the politics of disgracing others, so such politicians could not claim to be the leader of civilized Pakistanis.

Addressing a gathering at Kahuta's small village Narh, he said,   "Pakistanis give honour and receive honour. The one habitual of publicly disgracing and humiliating others, cannot be their leader."

Without naming Pakistan Tehreek-e-Insaf's chairman, he said the opposition was scared of the government's journey of progress and prosperity and wanted to interrupt it at any cost.

"Such elements want to halt the development process which the Pakistan Muslim League-N government is continuing in the best interest of common man," he added. However, he categorically vowed not to bow down before opposition's such attempts and negative propaganda.

The Prime Minister said no previous governments, whether of General Musharraf or Pakistan Peoples Party, took steps for the development of country including construction of motorways or overcoming electricity shortage.

He termed those responsible for energy crisis as 'public offenders' and said their apathy resulted in worse load-shedding of even 16 to 18 hours a day.

"The PML-N is the sole political party with the credit of economic turnaround, nuclear tests, motorways and overcoming energy shortage," he said. He also expressed confidence that PML-N would sweep next general polls of 2018 on the basis of its track record of development.

The Prime Minister said the construction of a highway from Khunjrab having altitude of 16,000 feet at China border down to Gwadar was in progress, which would connect the country's north with south.