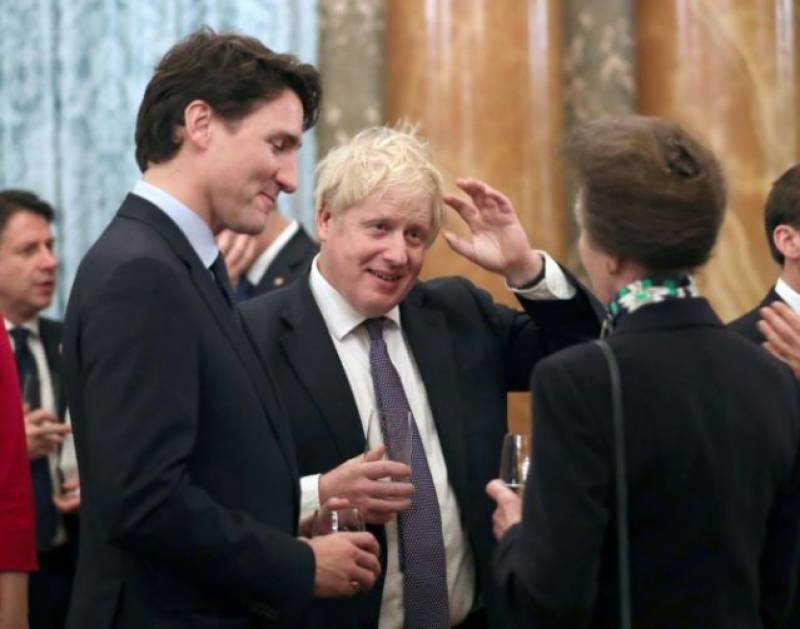 LONDON - The leaders of Britain, Canada, France and the Netherlands have been caught on camera at a Buckingham Palace reception mocking US President Donald Trump's lengthy media appearances ahead of Wedensday's NATO summit.

The footage, shot by the British host's camera pool on Tuesday evening and spotted and subtitled by Canada's CBC, set the tone for the allies' summit in Watford, just outside London.

British Prime Minister Boris Johnson can be heard asking France's President Emmanuel Macron: "Is that why you were late?"

Canada's Prime Minister Justin Trudeau interjects: "He was late because he takes a 40 minute press conference off the top."

Earlier Tuesday, Macron's one-on-one pre-summit meeting with Trump had been proceeded by a lengthy question and answer session with the media, as the leaders publicly disagreed about NATO strategy and trade.

In the video, Macron appears to tell an anecdote about the encounter as Britain's Princess Anne and Dutch Prime Minister Mark Rutte look on, but the French leader's back is to camera and he is inaudible amid the hubbub.

"Oh, yeah, yeah, he announced..." an amused Trudeau declares, adding: "You just watched his team's jaw drop to the floor."

As he did at last year's NATO meeting, Trump has thrown out normal summit protocol and used his appearances with allied leaders to field dozens of questions from the world's media.

He has condemned as "nasty" Macron's criticism of NATO, branded European countries that have failed to meet military spending targets "delinquent" and railed against moves in Washington to impeach him.

Trump is due to give another news conference, this time on his own, later Wednesday after the 29 NATO leaders hold a full three-hour closed-door summit session and issue a statement to celebrate their unity. -APP/AFP