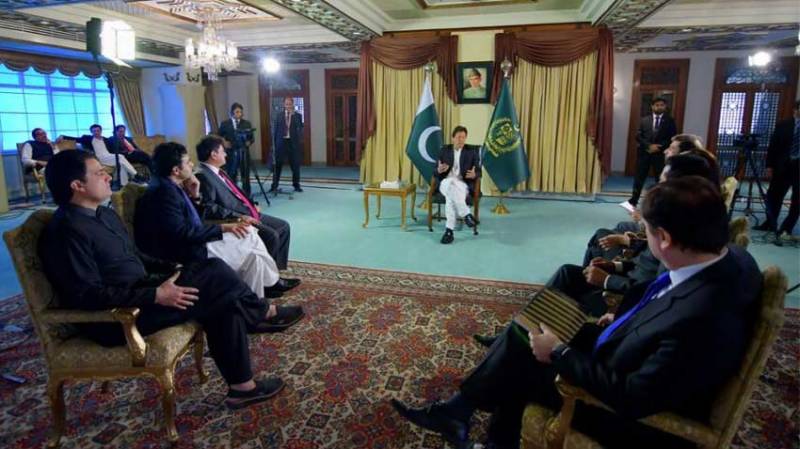 Prime Minister Imran Khan says all indicators of the government are moving in the positive direction and the results of economic policies will start producing results in the coming months.

Talking to senior anchors and journalists in Islamabad on Monday, the Prime Minister said direction of government has been set clear in the first 100 days. He said we have changed the direction from an elitist system to one that represents people at the grassroots level. He said the system that had been skewed to favour upper class is now more focused on masses.

Imran Khan said reforms in education and health have been made and provision of health card will go a long way in providing free health services to the poor segments. Similarly, legal aid authority has been set up to provide legal assistance to those who are unable to afford for their legal problems.

Prime Minister said Pakistan has a huge potential in the livestock sector and it can tap its share in trillion dollars halal industry worldwide. Replying to a question, he said the price of dollar rose due to depreciation in rupee made by State Bank of Pakistan in their autonomous decision.

Replying to another question, Imran Khan said state owned enterprises are suffering huge deficits due to wrong policies of the previous governments. Now, the government has established Sarmaya Pakistan Company to run these organizations on profitable lines by curtailing their losses and running these on professional lines.

The Prime Minister said all functionaries of government are accountable to people for their deeds. On the issue of Federal Minister for Information Technology Azam Swati, the Prime Minister said if the minister is proven guilty in a case, he will resign from his position. Imran Khan said doors of Chief Minister Usman Buzdar are open for public all the time and the province has never seen such a chief executive.

He told a questioner that censorship is hiding of information by such people who do not want to disclose the things to public. The Prime Minister said only public can keep the government in control.

He said now FBR would collect taxes and Ministries of Finance and Commerce will make policies. Prime Minister told a questioner that Pakistan can have no future if the system of corruption is allowed to run. Giving the example of China, he said the country would have become an economic giant as if it had penalized the corrupt elements.

Imran Khan said NAB is working independently and government has no influence over it. He lamented on low conviction rate of NAB comparing it with other anti-corruption watchdogs in the world. The Prime Minister said government is acting against big wigs and so far encroached land worth billions of rupees have been retrieved from the land grabbers.

Prime Minister said the bureaucratic reshuffling has been made purely on merit and there was no other motive behind these transfers and postings, as projected by a section of media.

The Prime Minister assured the nation that Pakistan's economy will improve to a great extent as these policies start giving fruits. Imran Khan on a question regarding the appointment of Chairman Public Accounts Committee said the demand of opposition to appoint Shahbaz Sharif is unrealistic and it will cause embarrassment to the country in the comity of nations. He said it will not be fair to appoint a person as Chairman Public Accounts Committee who is facing multiple corruption charges. He said if agreement is not reached with the opposition, the government will set up its standing committees.

Imran Khan said the opposition has been trying to put the government under pressure from day one. He said the opposition only wants to get an NRO in order to get rid of corruption cases. However, this will not materialize. The Prime Minister said civil-military relations are very good and civil and military leadership is on same page regarding key national issues.

He said the Kartarpur Corridor was opened to give the Sikhs living in India a passage to visit their holy place and offer their religious rituals freely. The Prime Minister said he was happy to see the pleasure on the faces of Sikh pilgrims.

When the Prime Minister was asked on the role of Pakistan in mediation efforts in the Yemen conflict, he said we have conveyed our offer of mediation to both Iran and Saudi Arabia as Pakistan believes that conflicts between the brotherly Muslim countries should be resolved.

Imran Khan said he received a letter from US President Donald Trump in which Pakistan's assistance has been sought on resolution of Afghan conflict. He said Pakistan has rendered huge sacrifices in the war against terror which are unparalleled. The Prime Minister said resolution of conflict in Afghanistan is also in the best interest of Pakistan. Pakistan has always made serious efforts to bring peace in the neighbouring country.

Imran Khan said he visited Saudi Arabia, UAE, Malaysia and China in order to seek benefits for Pakistan. He said during his meetings with leadership and business personalities of these countries, they expressed keen interest to invest in Pakistan. He said a good investment from Malaysia is expected soon.

On Pak-India relations, the Prime Minister said dialogue is the only way to resolve all issues between the two countries, including Kashmir. He said there can be no nuclear war between the two neighbours as it will destroy everything and no sane mind can think over this option. He said Indian leadership is not ready to hold talks due to upcoming general elections in that country. The Prime Minister said unless dialogue is started, various options on resolution of Kashmir cannot be discussed.

Prime Minister on a question regarding the arrest of leadership of Tehreek-e-Labbaik said when the issue of contest of controversial caricatures in Netherland surfaced, the government launched a full scale campaign to force the Dutch government to cancel this competition which became successful. Pakistan raised this issue at the forum of OIC and the United Nations.

However, the certain religious parties were doing politics on this issue and their activists created mayhem and chaos in the country during the protests. He said these parties were using the issue of blasphemy for their vote bank. He said every Muslim believes in the finality of Prophethood (PBUH).

On another question, the Prime Minister said legislation is being introduced to complete the civil cases in one and half years' time at the maximum. He said a whistle blower act has also been introduced in order to expose the corruption.

When he was asked about formation of new province in southern Punjab, the Prime Minister said South Punjab province will be created after holding consultation with all stakeholders. He said PSDP expenditures in Rahim Yar Khan are 2500 rupees per capita in comparison with 70,000 rupees per capita in Lahore. He said administrative facilities are being provided for the creation of South Punjab as this area has lagged behind in development.

The Prime Minister said the issue of razing the walls of Governor House was made to break the symbols of colonialism. These buildings were erected to rule the people during colonial times. Dismantling of these walls will reduce distance between rulers and people. He said first 100 days were really challenging and the government took big measures to overcome the problems it inherited.