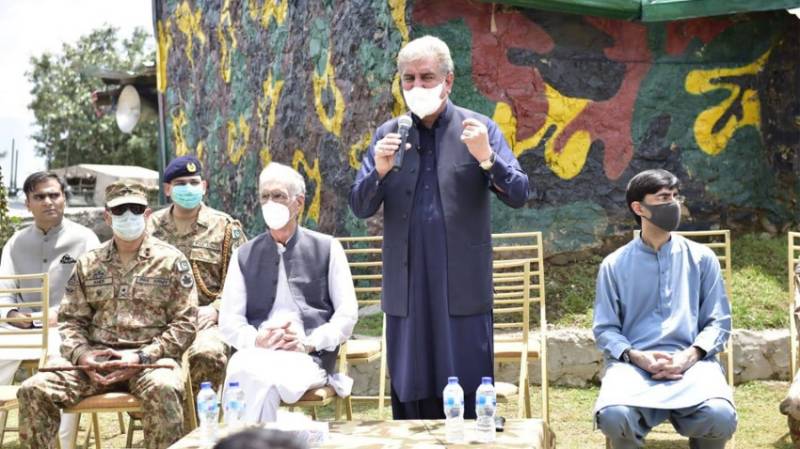 ISLAMABAD-Foreign Minister Shah Mahmood Qureshi says the country's civilian and military leadership and the political parties have a unanimous stance on Kashmir dispute.

He was talking to the people residing along the Line of Control on Monday.

The Foreign Minister said Prime Minister Imran Khan as an Ambassador of Kashmir is fighting the case of Kashmiri people at every forum.

He said we will represent the sentiments of the Kashmiri people to shake the world conscience.

Shah Mahmood Qureshi said India is trying to give a false impression that the situation is normal in Indian illegally occupied Jammu and Kashmir.

He said if the situation is normal then unlock the mosques there.

He said India has deployed nine hundred thousand troops in the occupied territory.

The Foreign Minister said Kashmir highway will now be called Srinagar highway because our destination is Srinagar.

He said the day is not far away when the Kashmiri people laced with the spirit of freedom will offer special prayers at Jamia Mosque Srinagar.

Representatives of foreign media also accompanied the delegation, where military officials briefed them about the ongoing violations of LoC by Indian security forces and the consequent damage to civilian population in the wake of frequent firing.

Prior to departure, the Foreign Minister Shah Mahmood Qureshi while talking to media in Islamabad said Kashmiris have rejected India’s illegal move of August 5 and would continue their struggle for their right to self-determination.

He said the visit to LoC is aimed at expressing solidarity with the oppressed Kashmiris and their families being subjected to daily Indian atrocities and unprovoked firing.

Shah Mahmood Qureshi said we want to assure that the Pakistan Army, the Pakistani leadership and the entire Pakistani nation stand by Kashmiris.

They also discussed the strategy to observe 5th August as Youm-e-Istehsal.

The Foreign Minister reaffirmed Pakistan's commitment to raise the voice of oppressed and armless Kashmiri people at every world forum.