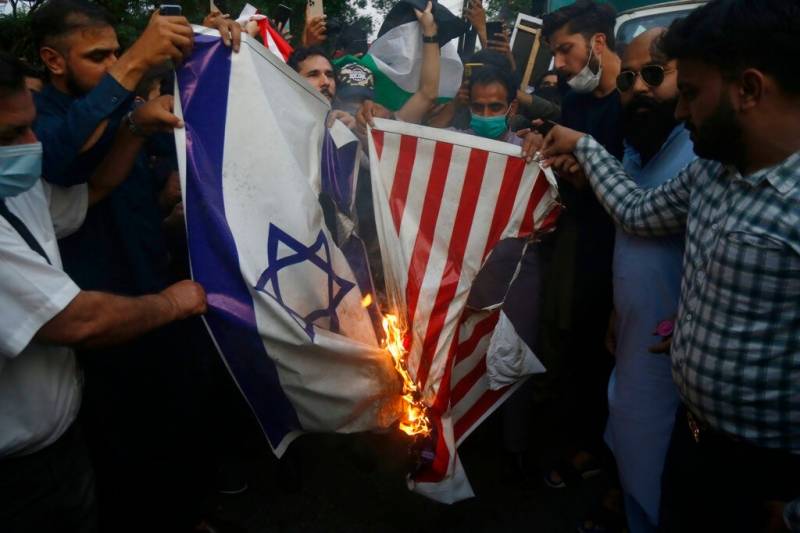 Ever since Imran Khan married the daughter of Sir James Goldsmith in March 1995, allegations that he is supported by, and beholden to, the "Jewish lobby" have followed him in Pakistan, a country where conspiracies are relished.

Just a year after his marriage, Imran Khan founded the Pakistan Tehreek-e-Insaf (PTI), now the ruling party in Pakistan link where Khan serves as Prime Minister.

Before he became an influential politician, Khan had been framed as an agent of the "Jewish lobby" by popular religious scholar, Dr Israr Ahmed, who enjoyed a following of millions, way before anyone took Imran Khan seriously as a politician.

Despite these allegations link, Khan managed to make his way to the helm of affairs, capitalizing on his popularity as a cricketing hero who helped Pakistan win the World Cup link in 1992. Today, Imran Khan may have been prime minster for nearly four years, but his critics continue to claim that he is an Israeli/Jewish agent.

Moulana Fazlur Rehman link, the head of the Jamiat Ulema Islam- Fazlur Rehman and the Pakistan Democratic Movement (PDM) claimed just a few days ago that bringing Imran Khan’s government in Pakistan was a plot by international players, including Israel, which was now failing.

Even opposition leader Maryam Nawaz Sharif has not shied away from using the Jewish trope for political point-scoring against Khan. At a political rally, she accused Khan of being funded by Israel link, and named Barry C. Schneps, an American Jewish lawyer link, as being a financial benefactor of Imran Khan’s PTI.

So common is invoking Israel as a delegitimizing slur in Pakistani discourse that senior journalists indulging in petty arguments on social media use the "Israel card" to discredit their rivals.

On March 28, senior journalist Hamid Mir took a jibe link at his fellow journalist Moeed Pirzada for what he alleged was advocating for better ties with Israel, in contrast to what he said was his own endorsement of the views of Pakistan’s founder Mohammad Ali Jinnah’s on Israel (Jinnah explicitly rejected relations with Israel).

The next day, Moeed Pirzada hit back, writing on Twitter: "True to his sprit, Hamid Mir is distorting facts; it was a discussion in front of 40 plus journalists in 2019, when it was mentioned that Israel may have supported India's attack on Balakot, I reminded PM that Arab countries (UAE & others) are forging close relations with Israel."

Breaking news and analyses straight to your inbox Click here

This argument on Twitter may be considered something insignificant and petty. However, on any given day, there is at least one mention of Israel in Pakistan’s news landscape, reflecting how much this small Middle Eastern country is an obsessional part of the imagination of Pakistanis at all levels.

Knowing this, Imran Khan and his team have not shied away from using conspiratorial thinking, especially involving Israel, to their own advantage. Tuesday, Pakistan’s Information Minister, Fawad Chaudhry accused former Prime Minister Nawaz Sharif, the head of the largest opposition party, the Pakistan Muslim League Nawaz (PMLN) of meeting Israeli diplomats in London. He offered no proof for his claim.

In an earlier speech this week, Khan referred to Nawaz Sharif as "the man in London" and questioned his meetings with dubious players. [image: Supporters of opposition groups take part in an anti-government rally in Islamabad, Pakistan as Prime Minister Imran Khan faces a no confidence vote in the National Assembly]

Supporters of opposition groups take part in an anti-government rally in Islamabad, Pakistan as Prime Minister Imran Khan faces a no confidence vote in the National AssemblyCredit: Rahmat Gul /AP

Nawaz Sharif's brother, Mian Shehbaz Sharif, is the opposition's joint candidate as prime minister, and with over 190 National Assembly representatives now committed to voting Khan out, when a majority of 172 is required, the ascent of the younger Sharif seems inevitable link.

But at the crossroads of his political innings, facing a no confidence vote and having lost his majority in parliament, Khan is brandishing the weapon which has been used against him all his life: Conspiracy link theories link .

Waving a piece of paper link in front of a charged crowd on Sunday, Pakistan’s premier claimed that the no confidence vote against him was actually a plot by a foreign power to remove him from power, as punishment for his efforts to secure an independent foreign policy in Pakistan.

His supporters charge that America is the prime mover in this attempted "coup," and that the U.S. is particularly aggrieved by Islamabad’s failure to condemn Russia’s invasion of Ukraine and by Khan’s refusal to progress towards recognition of Israel .Khan has ratcheted up his populist anti-U.S. rhetoric at recent rallies, accusing his political opponents of being ‘slaves of America.'"

He made a particularly inauspicious trip to Moscow link, meeting with President Vladimir Putin (and with Chechen leader Ramzan Kadyrov) on the very day Russia launched its invasion of Ukraine, a visit widely seen as a Kremlin manipulation play.

Accusing his political opponents of taking foreign money and being party to this conspiracy to remove him, Imran Khan presented himself as the savior of Pakistan’s autonomy in international relations.

Pakistan’s Foreign Minister, Shah Mahmood Qureshi also confirmed that the alleged letter had been shown to the military establishment, the power behind the scenes and kingmaker in Pakistan.

Why then is Pakistan’s all powerful military and intelligence service silent when the Prime Minister is claiming to be a victim of a hostile foreign conspiracy? Surely, if there was any truth in Khan’s allegations, they would be actively seeking to defend Pakistan’s sovereign political processes?

A senior serving Pakistani official told me that the letter Khan was referring to may actually be an internal communication by Pakistan’s former Ambassador to the U.S., Asad Majeed Khan, who left office on 25 March. According to the source, the former envoy shared U.S. concerns about Pakistan’s growing relations with Russia, especially after Khan’s bilateral meeting with Putin.

Wednesday, Khan handpicked a select group of journalists to a briefing about the letter. One of the participants said that he claimed that the imminent no confidence vote was also mentioned in the letter. No tangible evidence emerged from that meeting, either.

Practitioners of diplomacy and statecraft have privately commented that no state issues threats in writing unless there are exceptional circumstances and they are backed by international law.

This leads to the inescapable conclusion that even after Imran Khan became a victim of conspiracy theories all his political life, he decided to create one, a big one, in order to extend his waning political capital. [image: Pakistani university students burn representations of Israeli and U.S. flags during a rally in support of Palestinians in Lahore, Pakistan]

Pakistani university students burn representations of Israeli and U.S. flags during a rally in support of Palestinians in Lahore, PakistanCredit: AP Photo/K.M. Chaudary

Consider: Imran Khan loses the vote of no confidence. He can then very conveniently claim that he stood up against Western/Jewish powers, as a proud bastion of Islam, but failed. He will ask for votes for a chance to try again.

If he wins, Khan can claim that he defeated the Western/Jewish powers all by himself and that he should be elected again so he can continue to do so.

Such a narrative could become extremely popular with the masses of Pakistan who have long been fed a steady diet of anti-Americanism and antisemitism link. [image: Supporters of the Pakistani religious group, Jamaat-e-Islami, take part in a rally in support of the Palestinian cause, in Peshawar, Pakistan last year]

Supporters of the Pakistani religious group, Jamaat-e-Islami, take part in a rally in support of the Palestinian cause, in Peshawar, Pakistan last yearCredit: AP Photo/Muhammad Sajjad

After the war on terror, subsequent governments as well as the Pakistani establishment have successfully indoctrinated the masses to believe that America is a fundamental enemy of Muslims. Imran Khan took this to a different level when he termed Osama bin Laden, a terrorist who is responsible for the deaths of thousands and whose 9/11 plot triggered the war on terror, a "martyr link."

Despite having been an international playboy who indulged in a colorful lifestyle entirely contrary to the teachings of Islam, Imran Khan has been able to rebrand himself as a reformed and devout Muslim who is willing to sacrifice anything for the interests of Pakistan and the Muslim *ummah*.

To this end, Khan has successfully pulled off two sessions of the Organisation of Islamic Cooperation in Islamabad, the latest one link featuring Chinese Foreign Minister Wang Yi.

And despite successes in diplomacy with Russia, China and the Muslim world, Khan has not yet received a single phone call from U.S. President Joe Biden, a signal of how much the relationship between the U.S. and Pakistan has weakened ever since the Biden administration came into power.

This is in contrast to PM Khan's relationship with the Trump administration, who invited him to Washington in 2019 and called Khan a "great athlete link and a very popular prime minister," and even volunteered to "campaign for him."

But after the U.S.-Pakistan dynamic took a turn for the worst, Khan, who has also been referred to as "Pakistan's Trump link," is using an enigmatic and unsubstantiated letter to save his dwindling political capital.

Politicians using conspiracy theories involving foreign nations may temporarily revive declining political fortunes. But it is the nation and its people who suffer from the promotion of manipulative fantasies over facts and the truth, from incitement towards hate and scapegoats, and from the lost opportunity of cooperation with nations that could and should be friends.

*Hamza Azhar Salam is a Pakistani journalist based in London. He is the co-founder of The Pakistan Daily and Migrant News and has worked as a reporter for Pakistan’s The News International. Twitter: @HamzaAzhrSalam link*