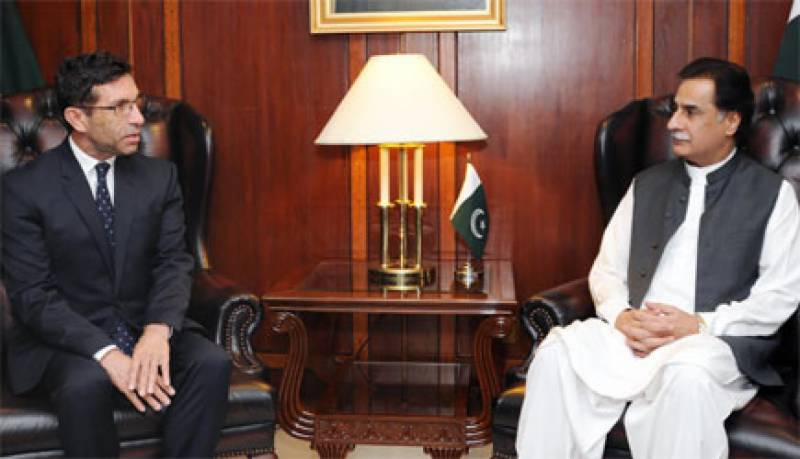 Speaking to Jan Fury, Ambassador of the Czech Republic to Pakistan, he underlined the need for a robust trade and economic partnership for genuine development in the region and beyond.

The Speaker highlighted that Pakistan is committed to promote regional peace and security in the region and strongly condemn human rights violations and denial of right to self-determination to the people of Jammu & Kashmir and anywhere in the world.

He outlined that Pakistan has resolved to foster deeper cooperation and partnership for peace with the European countries and consider Czech Republic as important friend in Pakistan's broader outreach to Europe.

Sardar Ayaz Sadiq underlined the need for regular exchange of Parliamentary delegations and meetings of the Parliamentary Friendship groups to add strength to the parliamentary ties.

The Speaker highlighted that the current government is committed to intensify cooperation with the Czech Republic in the areas of defence, energy, education, culture, infrastructure and industries.

He added that Pakistan is fast emerging an attractive destination for investment in engineering and infrastructure sectors and stressed on the need for interaction between Chambers of Commerce, said a press release.

He outlined that people-to-people contacts is the essence of strong bilateral relations and suggested that both countries should facilitate cultural exchanges.

He added that Czech Republic acknowledges Pakistan's aspiration for regional peace and security.

He further remarked that cooperation with Pakistan in science, agriculture and defense are key priorities of Czech Republic's long standing relations with Pakistan.

He acknowledged Pakistan's sacrifices in the global war on terror and added that remarked that Czech Republic will continue to partner with Pakistan in strengthening democracy, rule of law and to promote genuine human development in the region.