Donald Trump in yet another turmoil
3 Mar, 2017

Top US Democrats demanded the resignation of Attorney General Jeff Sessions Thursday over his failure to disclose that he met twice with Russia's ambassador to Washington during last year's election campaign.

The revelation of Sessions' Russian contacts - which directly contradicted his testimony in Senate confirmation hearings - plunged President Donald Trump's administration into fresh turmoil, dashing its hopes for a feel-good reboot after a chaotic start.

The previously undisclosed meetings once again raised the question of whether Trump's campaign team colluded with Russian attempts to influence the outcome of the US elections. 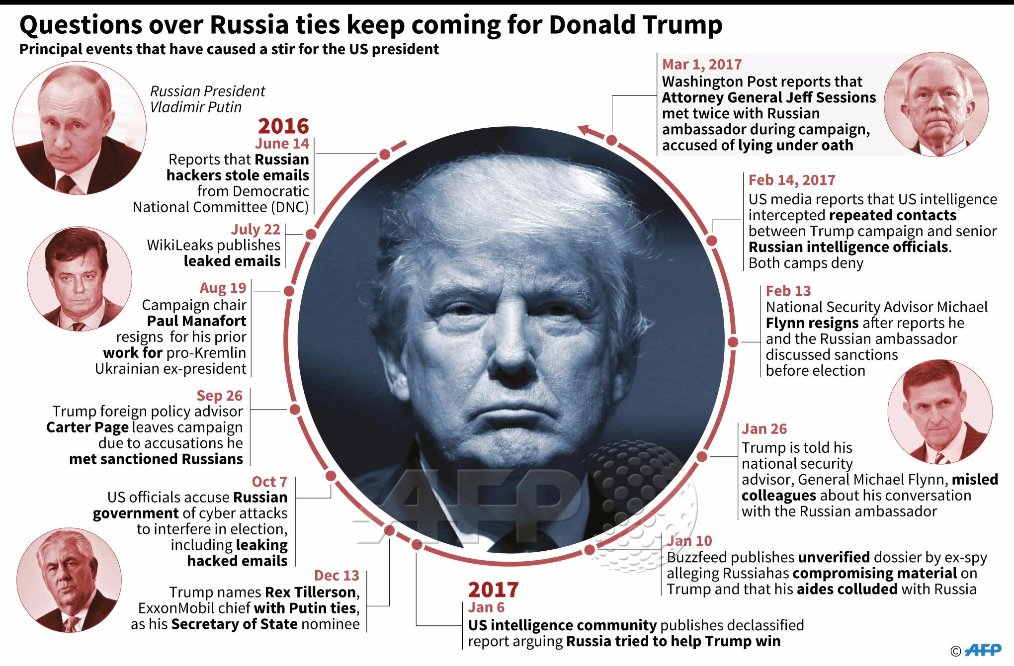 And they fed mounting calls for Sessions to recuse himself from oversight of Justice Department and FBI probes into the alleged Russian meddling and contacts with Trump campaign advisers.

“I have said whenever it's appropriate, I will recuse myself. There's no doubt about that,” Sessions told NBC News, while denying any wrongdoing.

PM and COAS completed consultations on appointment of DG ISI

“I have not met with any Russians at any time to discuss any political campaign, and those remarks are unbelievable to me and are false. And I don't have anything else to say about that.”

The White House confirmed the meetings took place but insisted Sessions had done nothing inappropriate and dismissed the revelations, which first appeared in the Washington Post, as a partisan attack.

Several leading Republican lawmakers joined Democrats in calling on Sessions to stand back.

“AG Sessions should clarify his testimony and recuse himself,” Jason Chaffetz, a member of the House Government Oversight Committee, tweeted.

Democrats went further, demanding that the attorney general resign and that a special prosecutor be appointed to probe the administration's Russia links.

“The Department of Justice should be above reproach,” said Senate Minority Leader Chuck Schumer.

“For the good of the country, Attorney General Sessions should resign.” If the Justice Department failed to act on naming a special prosecutor, Congress should act to put the matter in the hands of a panel of judges, he said.

Nancy Pelosi, the top Democrat in the House of Representatives, also called for Sessions to step down.

Dashed after-glowThe latest revelation came as the White House was basking in the after-glow of Trump's well-received speech to a joint session of Congress on Tuesday.

Trump's softer tone in the address was seen as a tactical retreat from the whirlwind of conflicts and controversies that unsettled his first 40 days in office.

The calm was shattered late Wednesday.

The Washington Post revealed for the first time that Sessions met Russian Ambassador Sergey Kislyak in July and September, just as accusations of Russian interference in the election were mounting.

When asked about the Trump campaign's alleged contacts with the Russians, Sessions said, “I have been called a surrogate at a time or two in that campaign and I didn't have - did not have communications with the Russians, and I'm unable to comment on it.”

A White House official rejected the Post report as “the latest attack against the Trump administration by partisan Democrats.”

“Sessions met with the ambassador in an official capacity as a member of the Senate Armed Services Committee, which is entirely consistent with his testimony.”

In Moscow, the Kremlin said it was unaware of any specific meetings between Sessions and the Russian ambassador ahead of the US election, but that any such encounters would have been routine.

Repeated contacts?It was the second time Kislyak has emerged at the center of the Russia controversies.

Trump's national security adviser Michael Flynn was forced to resign February 13 after it was reported that he had talked to the Russian ambassador the same day that outgoing president Barack Obama was expelling 35 Russian diplomats in retaliation for the election meddling.

Flynn misled Vice President Mike Pence about the nature of the talks, which eventually led Trump to sack the retired general.

The New York Times reported two weeks ago, citing US intelligence sources, that three Trump campaign staff - including campaign chief Paul Manafort - had communicated with Russian intelligence officers over the past year.

The White House also labeled that report “false” and has accused Democrats, the media and the intelligence community of a political effort to undermine the Trump administration.

US intelligence chiefs announced in December that they had concluded that Russian President Vladimir Putin was behind a hacking and misinformation campaign to hurt Hillary Clinton and boost Trump's chances to win the November 8 presidential election.

But they have not made their evidence public, and the Kremlin denies it.