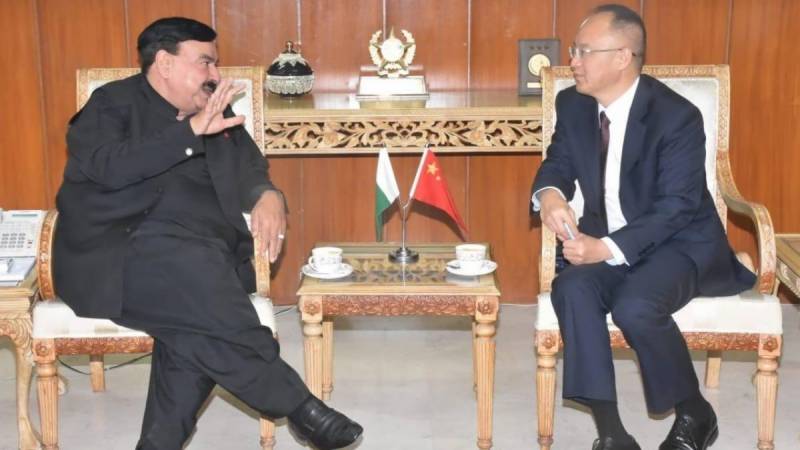 Interior Minister Sheikh Rashid said Thursday that under the new policy approved by the government duration of a visa issued to a Chinese national would at least be for a period of two years.

Talking to China’s ambassador to Pakistan HE Nong Rong who called on him in Islamabad, he said now two-year work visas would be issued to Chinese nationals within 48 hours.

He told the visiting dignitary that the government had introduced a separate visa category for the Chinese citizens under the China-Pakistan Economic Corridor (CPEC).

Rashid further said that special desks were being set up at Pakistan’s airports for Chinese citizens.

In response, China’s ambassador to Pakistan HE Nong Rong said his country was extremely thankful to the government of Pakistan for facilitating the issuance of visas to the people of his country.

He expressed the hope that the facilities announced by the government of Pakistan would not only further cement Pak-China ties but would also attract investment and create job opportunities in CPEC and other projects.

Both of them expressed pleasure over the completion of 70 years of diplomatic relations between Pakistan and China.

Interior Minister thanked the Chinese envoy for supplying the coronavirus vaccine to Pakistan.

HE Nong Rong, on the other hand, appreciated the steps by Pakistan to control the spread of the pandemic.

Rashid requested the visiting dignitary to make arrangements for the return of Pakistanis studying in Chinese universities to China since it was feared that their entire academic year would go waste.

The Chinese envoy assured the minister that all possible efforts would be made for the return of Pakistani students, currently stranded in Pakistan on account of the coronavirus, to China.

The interior minister said Pak-China friendship was based on trust. “We are proud of our relations with China, and we will strengthen these further,” he vowed.

China’s ambassador said that CPEC was the reflection of the strongest Pak-China ties. “Pakistan and China are iron brothers, and we are proud of that relationship,” he reciprocated.