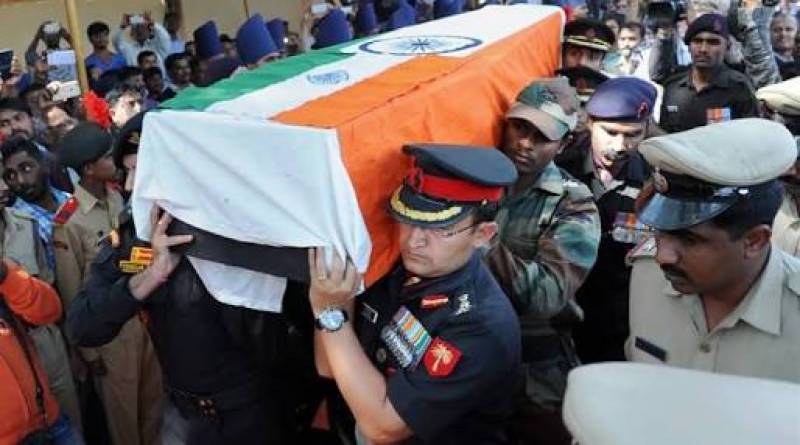 Terrorists were able to penetrate into the Pathankot Air Force Base despite of the special security measures adopted by Indian security forces and killed 7 Indian Army personnel including a Lieutenant Colonel of NSG.

The operation continued for more than 72 hours and ultimately Indian Security Forces were able to gun down all 5 terrorists.

Immediately after the attack Indian Main stream Electronic and Print media along with he government Ministers blamed Pakistan for the deadly Pathankot Attack.

All 5 terrorists were believed to be men of Pakistani based militant group Jaish  e Muhammad JeM led by its Chief Moulana Masood Azhar and supported by Pakistani ISI; Indian mean stream media quoted.

However on June 2, 2016 exactly 5 months after the PathanKot attack Indian NIA Chief announced that we are unable to find any kind of evidence which could connect either Pakistan government or the Pakistan state institutions like Army or the ISI behind the Pathankot attacks.

Then the questions arises that why Indian State Media and the government made such a hue and dry immediately after the PathanKot Attacks blaming Pakistani Army and the ISI for the attacks.

What objectives did Indian Government achieve by such propaganda against Pakistan and it's Armed Forces.

However before we dilate upon these factors lets analyse few events that unfolded immediately before or after the PathanKot attack.

1.As reported by Times of India Indian Intelligence Agencies had clear cut intelligence information of the attack on defence installation in Pathankot.

2. Over 150 Black Cat commandos were deployed a day earlier in Pathankot attack.

3. All the market and Bazaars were closed a day earlier in Pathankot.

4. Air Officer Commanding visited the Base a day earlier to supervise the security arrangements.

5. NSA Ajit Doval chaired a meeting in this regard a day earlier and held separate sessions with IB and RAW Chiefs.

Few developments after the PathanKot Attacks are also worthy to be noticed.

1.How could India receive such a precise information about the attack while they claim that attackers crossed from Pakistan on the same day.

2. If such a precise intelligence information was available and extreme security measures were taken then how could 5 men penetrated the Indian Black Cat Commandos security.

3. Initially the operation was announced to be over within hours but subsequently Defence Minister said that operation is still on and then continued for 3 days.

4. How come Indian know immediately even during the attack that they were JeM Chief Masood Azhar men, when the so called operation was still going on in Pathankot.

The Pathankot attack investigations were taken over by NIA. During the investigations interesting but conflicting facts appeared which could not be answered till today.

1. Why the SP Gurdaspur Slavinder Singh was kidnapped and then subsequently released by Militants.

2. What was the role of the SP Slavinder Singh in the while episode.

3. Why Pakistani JIT team was not allowed to meet SP Slavider Singh for interrogation and investigation.

4 . From where the militants get the Indian Army vehicle for attack.

5. BSF Commander had negated the possibility of the militants crossing over from Pakistan on that night as claimed by Indian State Media.

6. How could the operation continued for three days when initially it was over within hours.

7. The only proof India had against Pakistan was the telephone record of mobile phones which were connected to Pakistan during the attack.

8. Another twisting fact was the cold blooded murder of the NIA Muslim inspector Tanzeel Ahmed who was included in the team of PathanKot attack investigation and was likely to visit Pakistan in this regard along with the proposed Indian JIT. Inspector Tanzil Ahmed was suspected to have few reservations about the false flag operation investigations being conducted by NIA and other agencies.

Now the question arises who attacked Pathankot and what objectives were achieved through it.

Indian Intelligence agency RAW has the reputation of conducting false flag operations within own territory to malign Pakistan Army and ISI.

Samjhota Express Attacks and Malegaon attacks were also initially labelled against Pakistan ISI but subsequently it turned to be the false flag operations conducted  by its own men.

What objectives were achieved through the Pathankot false flag operations.

1 . Narendra Modi was under tremendous pressure from extremist Hindu circles like RSS, Bajrang Dal and other extremist Hindu organisations to end the negotiations and peace talks with Pakistan.

2. India wanted to show world that on one side Narendra Modi is visiting Raiwind Lahore to meet Pakistani Premier Nawaz Sharif and on the other hand Pakistani intelligence agencies are spreading terrorism in India.

3. To malign the Pakistan Army and ISI of supporting terrorism in India.

4. To take away the pressure off from India on Pakistani stance of Indian terrorism in Karachi and Baluchistan.

5. To keep Pakistan under international. Pressure of terrorism support.

6. To pressurise USA to move away from Pakistan in its support as counter terrorism ally.

7. To prove the world that Pakistani ISI is still supporting the terrorist Non state Actors in the region.

8. To subdue the successes of Operation Zarb-e-Azab conducted by Pakistan Armed Forces.

All the above mentioned facts point towards an interesting hypothesis.

RAW is involved in disrupting peace in Karachi and Baluchistan: Sartaj Aziz

Is RAW utilised to run the Indian Foreign Policy ?