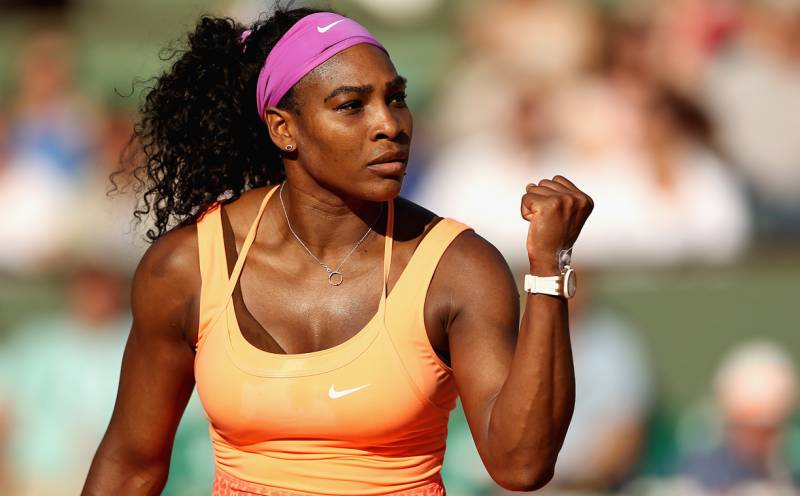 LONDON, July  3, (APP/AFP) - Serena Williams needed just 51 minutes to clinch the 300th Grand Slam win of her career on Sunday as the defending champion made the Wimbledon last 16.

The 34-year-old American brushed aside Germany's world number 43 Annika Beck 6-3, 6-0 on the back of 25 winners and seven aces and goes

"I thought it was good. I still want to get out to a little bit

of a faster start but I was really focused and calm," said Williams,

Williams has now won 82 matches at Wimbledon as she remains

Williams took the starring role as play was held on the

middle Sunday for only the fourth time in Wimbledon history, and the first time since 2004, as organisers tried to clear the backlog caused by

Murray, the 2013 champion, is the top seed left in the draw after world number one Novak Djokovic was knocked out by Sam Querrey on Saturday.

"I definitely have the tools to do it, but saying that,

he's probably one of the best players in the world and he's probably the favourite at the moment since Novak is out," Kyrgios said.

The fiery Australian went into Sunday's resumption under fire for using the "retarded" when he lambasted his support team on Saturday night.

But the 21-year-old apologised on Sunday.

"I didn't mean to be disrespectful," said Kyrgios.

Isner, the 18th seed, famously won the longest tennis match ever played when he beat another Frenchman, Nicolas Mahut, 70-68 in the

final set at Wimbledon in the first round in 2010.

Tsonga goes on to face fellow Frenchman Richard Gasquet for a

spot in the quarter-finals.

row with the umpire over coaching.

But the Russian was hit with a code violation for coaching early in the final set which prompted a bitter exchange with umpire Marijana Veljovic.

"Well, you're not doing it very well," responded Kuznetsova,

Russian 21st seed Anastasia Pavlyuchenkova made the last 16 of

Vandeweghe is one of the in-form players on grass this

year, winning at 's-Hertogenbosch and making the semi-finals in Birmingham.

Russia's Elena Vesnina made the fourth round for the first time in seven years by ending the run of US qualifier Julia Boserup, the world number 225, in straight sets, 7-5, 7-5.

Vesnina will face doubles partner and close friend Ekaterina Makarova, who was a bridesmaid at her wedding last year, for a spot in the quarter-finals.