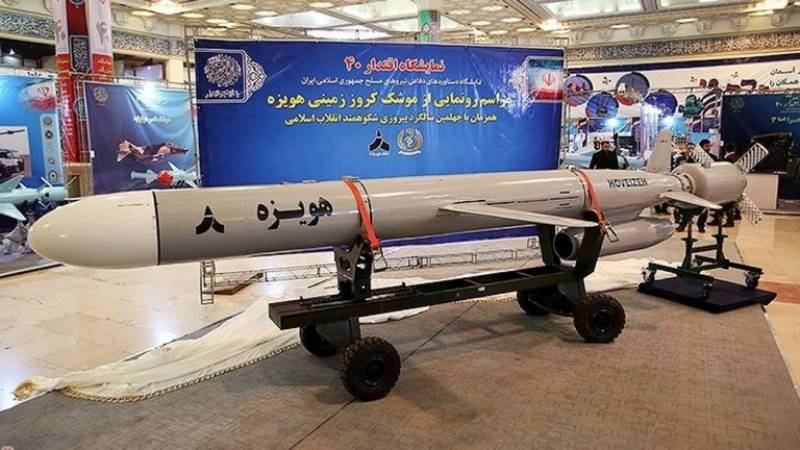 Tehran: Iran announced the "successful test" of a new cruise missile with a range of over 1,350 kilometres on Saturday, coinciding with celebrations for the country's 1979 Islamic revolution.

"The test of the Hoveizeh cruise missile was carried out successfully at a range of 1,200 kilometres (840 miles) and accurately hit the set target," Defence Minister Amir Hatami said, quoted on state television which broadcast footage of its launch.

"It can be ready in the shortest possible time and flies at a very low altitude," he said.

Hatami described the Hoveizeh as the "long arm of the Islamic Republic of Iran" in defending itself.

It is part of the Soumar group of cruise missile, first unveiled in 2015 with a range of 700 kilometres, according to the minister.

The Hoveizeh unveiling was part of an arms exhibition titled "40 years of defensive achievements" held in Tehran.

Friday marked the beginning of 10 days of celebrations of the Islamic revolution that ousted the pro-Western shah.

Iran has voluntarily limited the range of its missiles to 2,000 kilometres (1,250 miles), sufficient to reach Israel and Western bases in the Middle East.

But Washington and its allies have accused Tehran of pursuing enhanced missile capabilities that also threaten Europe.

Iran has "no intention of increasing the range" of its missiles, the country's Supreme National Security Council secretary, Admiral Ali Shamkhani, said Tuesday.

Iran reined in most of its nuclear programme under a landmark 2015 deal with major powers but has kept up development of its ballistic missile technology.

US President Donald Trump's administration pulled out of the accord in May and reimposed sanctions against Iran, citing the missile programme among its reasons.

European governments have stuck by the accord, although some have demanded an addition to address Iran's ballistic missile programme and its intervention in regional conflicts.

UN Security Council Resolution 2231 adopted after the deal calls on Iran "not to undertake any activity related to ballistic missiles designed to be capable of delivering nuclear weapons".

The US has repeatedly accused Iran of violating the resolution.

But Tehran denies seeking any nuclear weapons capability, and insists that its missile development programme is "purely defensive" and compliant with the resolution.

Iran's space programme has also come under Western criticism, with Washington charging that an abortive satellite launch in mid-January was cover for a bid at an intercontinental ballistic missile capability.

Iran tried unsuccessfully to put a satellite into orbit on January 15 and plans to "vigorously carry on" and make a second attempt, Shamkhani said.

Iran's newly-tested missile takes its name from a city in the southwestern province of Khuzestan that was devastated in the 1980-1988 against Saddam Hussein's Iraq.

Several Iranian cities were battered by missiles during the eight-year conflict in a bombing campaign dubbed the "war of the cities".

Iranian officials say Western sanctions have starved its air force of spare parts and replacement aircraft, limiting its operational capacity and forcing it to rely on the missile programme.