Pakistan strongly raises Kashmir issue at UN amid World focus on Ukraine
2 May, 2022 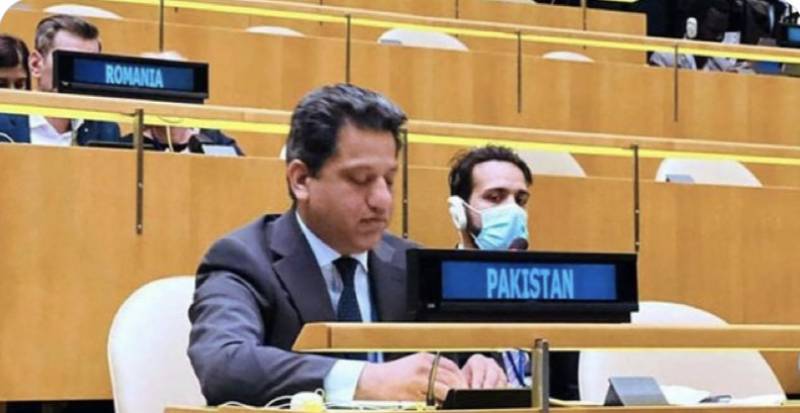 *UNITED NATIONS: Amid the world’s focus on the crisis in Ukraine, a senior Pakistani diplomat has urged the U.N. to promote universal accountability for grave human rights violations, especially in situation of foreign occupation — Kashmir and Palestine — as he stressed that there should be no disparity between such violations in two different circumstances.*

“If we want to pay attention to a particular situation which is currently in the limelight, we should also not forget the situations of Palestine and Jammu and Kashmir, where human rights are being trampled every day, and where counter-terrorism laws are used to silence civil society,” Ambassador Aamir Khan, deputy permanent representative of Pakistan to the UN, said at a virtual event where the alleged rights violations in the war-hit Ukraine were highlighted by several members.

“If we are raising voice in the context of one situation, we should not forget raising our voices in other two situations as well,” he emphasized.

In this regard, the Pakistani envoy urged the international community and the Office of High Commissioner of Human Rights in Geneva to make pronouncements on violations of human rights in Jammu and Kashmir and in Palestine as well, just like they are making pronouncements elsewhere– referring to Ukraine.

“Just like there is no hierarchy or precedence in the context of two sets of rights, i.e. economic rights or civil/political rights, there is also no disparity between violations of human rights in two different situations,” Aamir Khan added.

The virtual event was held to mark the second anniversary of the UN Secretary-General’s Call to Action for Human Rights, and the Pakistani envoy called it an opportunity to exchange views on how to advance S.G’s Agenda for human rights more robustly, including by exploring its linkages with ‘Our Common Agenda’, which deals with what has become known as the three “Cs’ — ‘Conflict, Climate Risk, and Covid-19” — linked by some, to poverty UN Under-Secretary-General for Policy, Volkar Turk, moderated the event.