International Labour Day protestors clash with Police in Istanbul and Paris
2 May, 2016 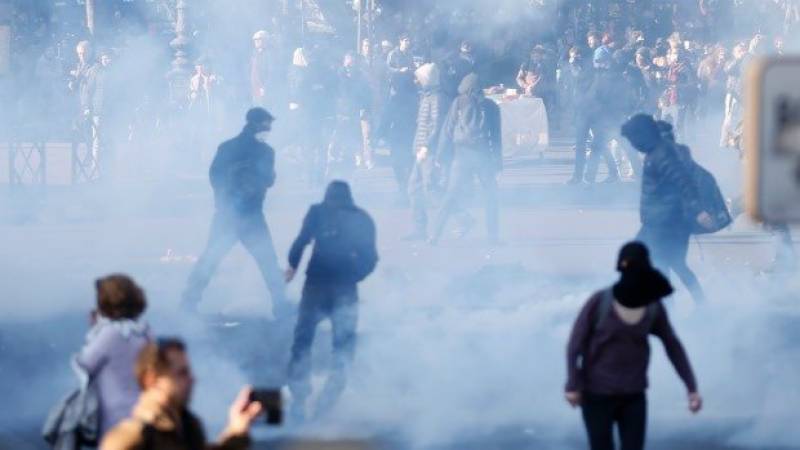 French and Turkish police fired tear gas at protesters as tensions erupted in both countries during May Day rallies Sunday, while thousands marched across the globe for the annual celebration of worker's rights.

In Paris, hundreds of black-clad riot police struggled to keep control of tens of thousands of protesters, with tensions high as youths in balaclavas and ski masks lobbed projectiles and shouted: "Everyone hates the police."

Police fired tear gas and sought to break up the group of troublemakers known as "casseurs" (breakers) who actively seek confrontation with security forces.

Security forces were on high alert across France for the protests which are riding a wave of anger against planned labour reforms set to come before parliament on Tuesday.

While government hopes the reforms will reduce chronic unemployment of about 10 percent, critics believe they threaten hard-won workers' rights by making it easier to lay off people in lean times.

The government has already watered down the bill but this has failed to calm the anger among students and workers.

"Withdraw, withdraw the labour law. Not amendable, not negotiable," protesters chanted as they began marching from the Bastille square.

A protest against the reforms on Thursday led to scenes of chaos with protesters setting light to cars and throwing cobblestones that left dozens of police injured.

"We will respond with the greatest of determination to these troublemakers... the attacks and violence against security forces are unacceptable," said Prime Minister Manuel Valls on Sunday.

In Istanbul, police clamped down on unauthorized protests at a time of particular tension after a succession of deadly attacks this year in Turkey blamed on jihadists and Kurdish militants.

Around 25,000 police were on duty, cordoning off the central Taksim Square and releasing volleys of teargas and water cannon on those trying to make their way to the protest hotspot, an AFP photographer said.

In the flashpoint area of Okmeydani, masked radical leftists threw Molotov cocktails and firecrackers at police and created burning barricades out of junk.

The office of the Istanbul governor said that 207 people were detained around the city for trying to march on Taksim. It said that 40 Molotov cocktails, 17 hand grenades and dozens of fireworks were seized.

In a separate incident, a man in his 50s was killed when he was run over by a police water cannon vehicle.

Hundreds of labour and union activists took part in an officially-sanctioned rally elsewhere in the city.

International Workers Day was started in Chicago in 1886 by a union demanding an eight-hour work day and is now celebrated around the world.

In Moscow around 100,000 workers joined a May Day parade on Moscow's Red Square, waving Russian flags and balloons near the Kremlin walls, police said.

The carefully choreographed parade took place amid an economic crisis brought on by Western sanctions over Ukraine and low oil prices.

Hundreds of thousands marched in Cuba at a rally condemning a campaign to "destabilize" leftist governments around Latin America.

"This May 1 is also a day to condemn the maneuvers aimed at... reversing the gains achieved in social policy in our America and destabilizing the leftist and progressive governments in power," Ulises Guilarte, the secretary general of the Workers' Central Union of Cuba, told a massive crowd on Revolution Square in Havana.

As examples, he cited Brazil, where President Dilma Rousseff is facing impeachment proceedings she condemns as a "coup", Bolivia, where President Evo Morales recently lost a referendum to allow him a fourth term amid a scandal over whether he fathered a love child,  and Venezuela where President Nicolas Maduro's opponents are seeking to oust him in a recall referendum.

Thousands of people marched in Madrid with banners proclaiming: "Against budget cuts and for retirees."

Spanish protesters also held banners saying "No one is illegal" and "No to TTIP", in reference to Europe's immigration policy and the planned transatlantic trade agreement with the United States.

In Austria, embattled Chancellor Werner Faymann faced jeering and boos as he addressed around 80,000 people in Vienna, a week after the government's disastrous defeat at the hands of the far-right in a presidential ballot.

In South Korea planned labour reforms have also sparked anger among workers, and tens of thousands protested against the bill.

Labour activists say the reforms being pushed by President Park Geun-Hye and her conservative Saenuri Party will make it easier for companies to sack workers.

"Let's fight together against the evil bill!" activists and union members chanted in unison during a protest in Seoul Plaza in front of City Hall.