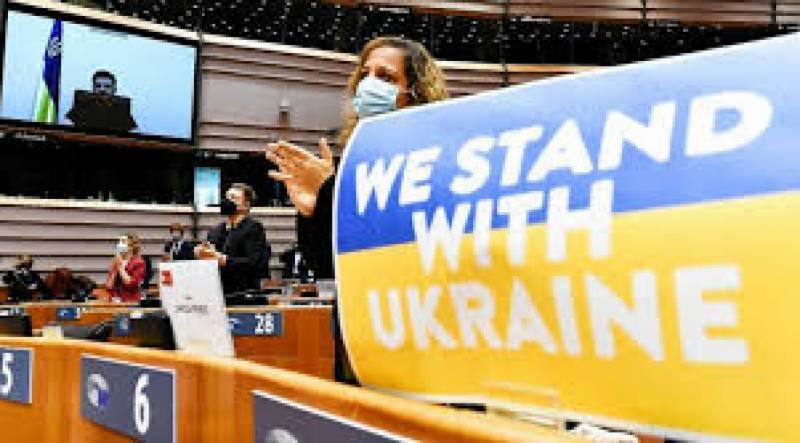 ISLAMABAD – As the Russian army continues to move deeper into Ukraine, representatives of 22 countries in Islamabad, including the European Union mission, urged Pakistan on Tuesday to join the international condemnation of the Russian “aggression”.

As the US and Western allies step up a diplomatic campaign to isolate Moscow, the United Nations Security Council (UNSC) emergency session on the Russian invasion of Ukraine began on Monday.

Russia vetoed a draft UN Security Council resolution on Friday that would have deplored Moscow’s invasion of Ukraine. China abstained from the vote — a move Western countries view as a win for showing Russia’s international isolation.

The United Arab Emirates and India also abstained from the vote on the US-drafted text. The remaining 11 council members voted in favour. The draft resolution is now expected to be taken up by the 193-member UN General Assembly.

“As Heads of Mission to the Islamic Republic of Pakistan, we urge Pakistan to join us in condemning Russia’s actions and to voice support for upholding the UN charter and the founding principles of international law,” the EU mission in Pakistan said in a statement.

In a post-meeting statement by the PM office, Khan said he “regretted the latest situation between Russia and Ukraine,” and “hoped diplomacy could avert a military conflict”.

“The Prime Minister stressed that conflict was not in anyone’s interest, and that the developing countries were always hit the hardest economically in case of conflict. He underlined Pakistan’s belief that disputes should be resolved through dialogue and diplomacy,” the statement said.

Russia is a Security Council veto power, along with the United States, China, France and Britain.

China’s abstention comes just weeks after Beijing and Moscow declared a “no limits” partnership, backing each other over standoffs on Ukraine and Taiwan with a promise to collaborate more against the West.