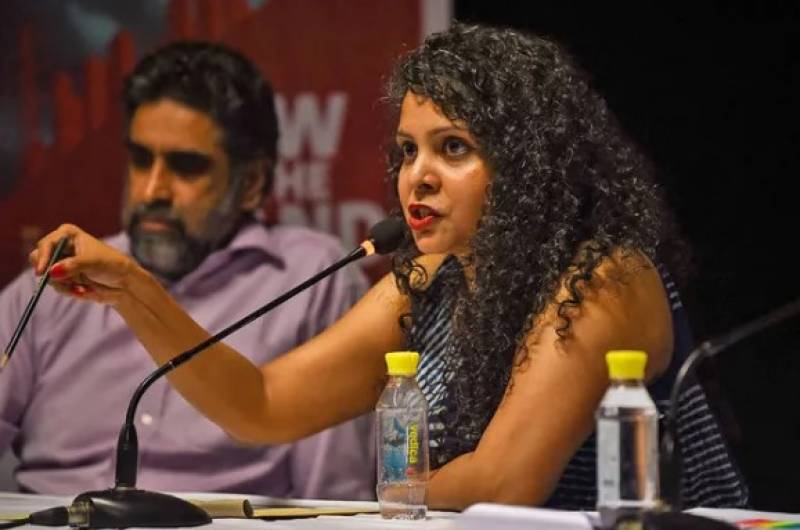 Prominent Indian journalist Rana Ayyub has deplored that Indian Prime Minister Narendra Modi whose hands are stained with the blood of 2,000 Muslims in Gujarat has taken away the presidency of G-20.

Rana Ayyub who received the prestigious John Aubuchon award conferred on her by the National Press Club of Washington, the Club’s highest honour for press freedom, this month, in her speech on the occasion introduced the present-day India to the world by saying, “220 million Muslim population is on the cusp of genocide” and added that “the free press is under attack in India”.

She dedicated it “to my colleagues Mohammad Zubair, Siddique Kappan, and Asif Sultan incarcerated for speaking truth to power”, reported KMS.

In her speech, she said, “To begin with, it is a huge honour for me, and I would like to thank Washington Post for having my back at a time when journalists and editors in India, where I worked and held top positions, which did not exist post 2014 when Modi became Prime Minister of India.”

She also criticized the US government’s lenient approach towards the Butcher of Gujarat, Narendra Modi and said, “When I am in the US, I meet US State Department and other top-ranking officials. They tell me we know what is happening in India, but bilateral relationship vis-à-vis China and Russia ….human rights be damned…journalists be damned.”

Rana Ayyub said that the man they have put on the cover [title page] of The Economist and The Time is a man who has blood on his hands. He has [blood on his hands]. In 2002, 2,000 Muslims were massacred in a span of two days and Mr Modi was the chief minister of Gujarat.”

“We never even thought as a joke that Mr Modi would become Prime Minister of India and the US would not allow entry this man to the country. Now look at him. He has just taken away the presidency of G-20,” she deplored.

“I happen to be a Muslim and a woman. How dare I speak? … Thank you for making me feel less alone and isolated.” She further added.

Ayyub, 37, began as an investigative journalist and wrote a book accusing PM Modi of being complicit in deadly sectarian violence in Gujarat in 2002, when he was state chief minister.