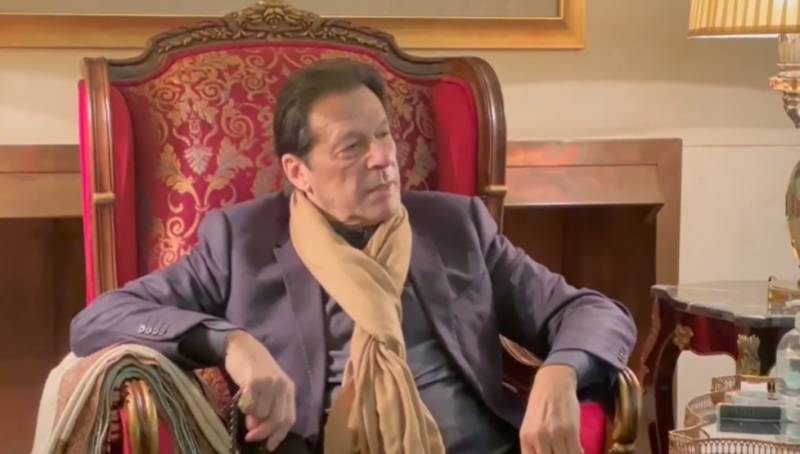 Former Prime Minister Imran Khan has disclosed that Gen (r) Qamar Javed Bajwa said to him in the last meeting, “You are a playboy” and in a reply, he accepted by saying, "Yes, I was".

Talking to the journalists, Imran Khan alleged Gen retired Bajwa was against rule of law in the country.

He said that Qamar Bajwa hired known journalist Hussain Haqqani for lobbying in America without his knowledge. He further accused the establishment of misguiding Donald Lowe who later demanded a change in the regime of Islamabad.

“Hussain Haqqani campaigned against me and promoted Gen (r) Bajwa. As a result, then chief of army staff Gen Bajwa was accorded historic reception by the Trump administration.”

Imran Khan said that Gen (r) Qamar Javed Bajwa’s setup is still operational in the establishment. He said Muttahida Qaumi Movement (MQM) is being united in Karachi and Balochistan Awami Party (BAP) has been included in Pakistan People's Party. “The name of the establishment in Pakistan is one man only.” However, he confessed that the establishment can play an important role in getting out of all crises including the economy.

He opined that the country will run only when the army and the political parties are on the same platform.

The former premier said he had excellent relations with the Afghan government led by the Taliban and Foreign Minister Bilawal Bhutto knew nothing about Afghanistan affairs.

To a question, he replied there is no benefit to going to the parliament.

Talking about the recent audio leak of his wife, he said Bushra Bibi is a housewife and does not come out of the house. “She used to go outside the house only to madhouses and langar khanays”

He said that Bushra Bibi is not alike Maryam Nawaz who spends millions of rupees on her surgery and makeup.