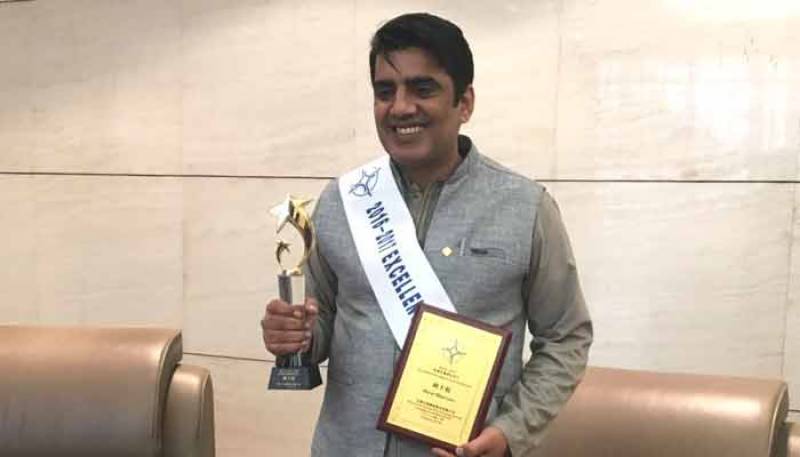 Abrar Manzoor, selected among130,000 employees from four continents, received this award from Vice President of the Company Sun Ziyu at a ceremony held in Beijing on Friday.

The CCCC is the world’s largest construction company and global constructor for different mega projects in countries along the Belt and Road Initiative including Pakistan.

“If you work hard, you will definitely be noticed, picked up and awarded. This is the basic formula for success,” he addedAbrar living in Saudi Arabia for the last 12 years, felt proud as Pakistani after winning the award.

He appreciated the Chinese people for their hard work and commitment and said that any nation who was not working hard, could not excel in this era.

Responding to a question, he said that since the launch of China Pakistan Economic Corridor (CPEC) framework, he anticipated job opportunities in Pakistan and he was thinking to go back to Pakistan to grab this golden chance and take part in the development of the country.

He said that a number of projects particularly power stations were being completed under the CPEC, a flagship project of the Belt and Road Initiative announced by Chinese President Xi Jinping for the shared prosperity of humankind.He said that because of electricity shortage, the industry was sacrificing but now China has invested heavily in power sector which has brought the life back to normal in Pakistan.

He said that people were getting jobs and they are going for daily life and this was an enormous thing for Pakistani people.” I must commend this great achievement between two friends”.

While commenting on Gwadar port, he said that because of its strategic location, the port would provide a short route and easy access to the Chinese companies to Middle East, Africa and Europe.