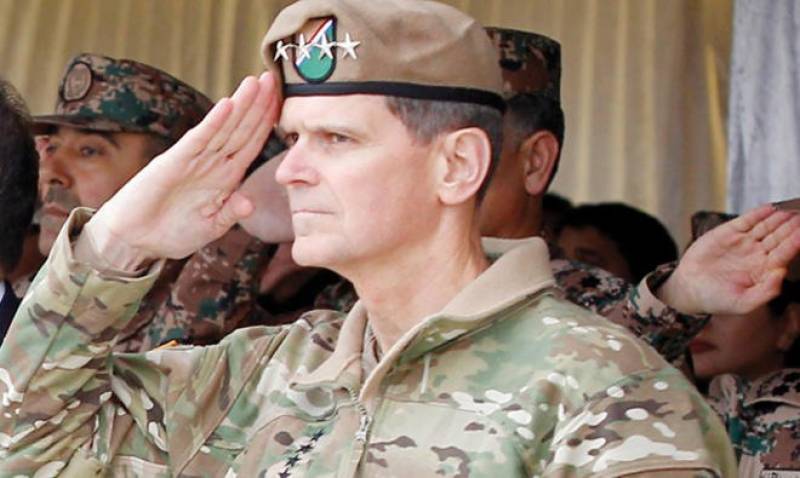 “We are very busily implementing our South Asia strategy, which is designed to bring the Taliban to the reconciliation table and end this very, very lengthy conflict (in Afghanistan),” he said during a teleconference arranged by the US State Department’s Dubai Regional Media Hub.

“This approach, this strategy, requires the partnership of not just Afghanistan, but of all countries in the region, and of course Pakistan is a key part of that,” he added.

“We have had our differences with Pakistan over the years on this, but Pakistan remains absolutely critical to the solution of the problem in Afghanistan.”

Votel recalled the heavy price that Pakistan has paid in its fight against terror. “There are very few countries that have suffered more from terrorism, or sacrificed more in fighting terrorism, than Pakistan,” he said in response to a question from Arab News.

He said the US is actively engaged with Pakistan in bringing peace to the region. “We are working very closely in our military-to-military chains, and in other venues, to improve our collaboration and our support back and forth in what is an extraordinarily complex situation,” he added.

“They are set to continue to put military pressure on the Taliban and its cohorts as we embark on this season’s fighting, and of course… the US-NATO coalition will play a key part in that, and we are taking all necessary actions right now to address that.”

Votel, who was in Riyadh recently, described Saudi Arabia as a “very, very important partner” of the US.

“Saudi Arabia is an extraordinarily important and influential state, not just in the Gulf but throughout the Middle East and globally,” he said.

The Saudis “have been very supportive of the activities of the (anti-Daesh) coalition, one of the original members of the coalition when it was set up back in 2014, and they continue to be a very important partner,” he added.

“Saudi Arabia leads a coalition in Yemen that is attempting to address the challenges posed by the Iranian-backed Houthi organization,” Votel said.

The Kingdom “is doing a very good job in helping to address some of the humanitarian issues that, unfortunately, are taking place in Yemen right now,” said Votel.

The Saudis “have supported the opening of the port of Hodeidah, but they also have a much broader plan to allow aid into numerous other ports, aid to come over ground lines of communication, and aid to come into airports and other airfields in the area,” he added.

“I know they have been very, very focused on this, and when I was in Saudi Arabia last week I had an opportunity to see some of what they are doing in this regard, and I think this is very important work,” Votel said.

“It highlights that Saudi Arabia, while they are attempting to accomplish a military mission, is also exerting a lot of effort to try to protect the population and address some of the human suffering that is unfortunately taking place.”

The Kingdom has been a close partner in counterterrorism with the US and many other countries for a long time, he added.

The Saudis “have very good internal security forces, intelligence services and others who have very effectively addressed terrorism in the Kingdom, and around the region, and have had a very collaborative relationship with the United States and with other countries in addressing this,” Votel said.

“More importantly, Saudi Arabia sponsors and hosts the Islamic Military Counterterrorism Coalition, and I had an opportunity to visit their staff when I was in Riyadh last week.

“This is a very important initiative that has over 40 nations — Islamic nations — as members of it, and is designed to address things like ideology.

“It is designed also to address things like financial resources that terrorists use, and to prevent them from doing that.

“It also attempts to address the training and equipment shortfalls that Islamic countries have in fighting terrorism.

“We consider Saudi Arabia to be not only a close partner, but a leader in addressing violent extremism, and the most clear example of that, of course, is the Islamic Military Counterterrorism Coalition.”

The US “shares many of the same concerns that Arab, and in particular the Gulf states, have about Iran,” said Votel.

Tehran has “had efforts in the past to develop and procure nuclear weapons. Certainly, this is a significant concern that we all share,” he added.

The nuclear deal is “designed to address that, and certainly the discussions continue about that.”

The destabilizing role Iran plays across the region “includes the facilitation of advanced weaponry to groups such as the Houthis, who use advanced missiles to… attempt to attack Saudi Arabia or the United Arab Emirates,” said Votel.

“Those are our very good partners, and we have some of our people and resources on the ground in those areas, so this is a concern for us,” he added.

“Iran continues to stoke and develop relationships with extremist groups… who are focused on conducting destabilizing activities and posing a threat to other partners, like Israel, in the region, and so this is a concern,” he said.

Tehran is “attempting to influence governments, and… trying to exert undue authority over governments across the region,” Votel added.

“In the past, they (Iran) have conducted very provocative activities in the maritime environment, particularly around the Strait of Hormuz and in the Bab El-Mandeb, where they have deployed capabilities or provided capabilities to their partners that could have a significant impact on the safe passage of commercial vessels and the movement of commerce through the area.

“Certainly this is a very, very significant threat, and we share all of these concerns with our Arab and Gulf partners, and of course we work very, very closely with them to align our efforts and collaborate in our planning.”

On Syria, he said: “We will continue to support the Syrian Democratic Forces as they continue their efforts to defeat ISIS (Daesh), and to prevent its resurgence, and to create conditions for stability in the area that will allow humanitarian aid and other organizations to get there to help the people.”

On the possible resurgence of Daesh, Votel said: “What we have seen with militants like ISIS or Al-Qaeda or other extremist groups is that they have a tendency to thrive and move into areas where there is a lack of government control, or there is great instability on the ground.”

He added: “We would expect that as ISIS is defeated in Iraq and Syria, we may see the rise of ISIS organizations in a place like Yemen, where there is great turmoil, where there is not complete control by the government, and these provide the conditions that an organization like ISIS can grow in.”