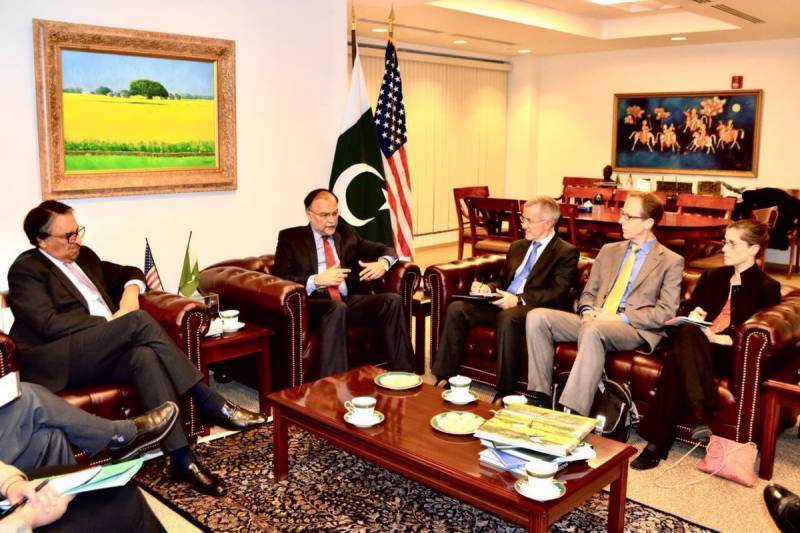 Federal Minister for Planning, Development and Reform, Professor Dr. Ahsan Iqbal has said, "Pakistan is fast emerging as a success story in Asia due to economic reforms introduced by the government.

Federal Minister for Planning, Development and Reform,Professor Dr. Ahsan Iqbal held a joint meeting with senior officials of the State Department and the USAID at the Embassy of Pakistan, Washington DC. Ambassador Jalil Abbas Jilani also joined the meeting.

The meeting reviewed the progress in implementation of the “Pakistan US Knowledge Corridor” envisioned by Prime Minister Nawaz Sharif during his last official visit to Washington in October 2015. An important element of the Knowledge Corridor is to work with the US educational institutions for producing 10,000 Pakistani Ph.Ds in the next ten years from well reputed US universities in various disciplines.

Ahsan Iqbal said the government is committed to developing quality human resource for the future of country to transform Pakistan's economy into a Knowledge Economy. Initiative to train 10,000 Ph.Ds in next ten years at top US universities is a critical element of Vision 2025, which seeks to put Pakistan in top 25 economies of the world.

He said government has allocated funds for this project and the first phase of the project with cost of Rs 18.5 billion has been approved by ECNEC recently."

Minister Iqbal urged the US officials to expedite the necessary formalities particularly the internal coordination between the relevant US agencies in order to facilitate the early roll out of this critical initiative for development of Pakistan’s human resource.

The US officials assured the Minister that they were working with the concerned departments in order to complete the necessary homework. A visit by the relevant US officials was expected in the next few weeks to complete the formalities for early commencement of the initiative.

Upon request of the US officials, Minister Iqbal also briefed about the major projects in the domain of energy and infrastructure development under the China Pakistan Economic Corridor.

Minister Ahsan Iqbal is visiting Washington DC to attend the annual National Prayer Breakfast ceremony. A large number of prominent national and international personalities attend this event which is also graced by the US President.