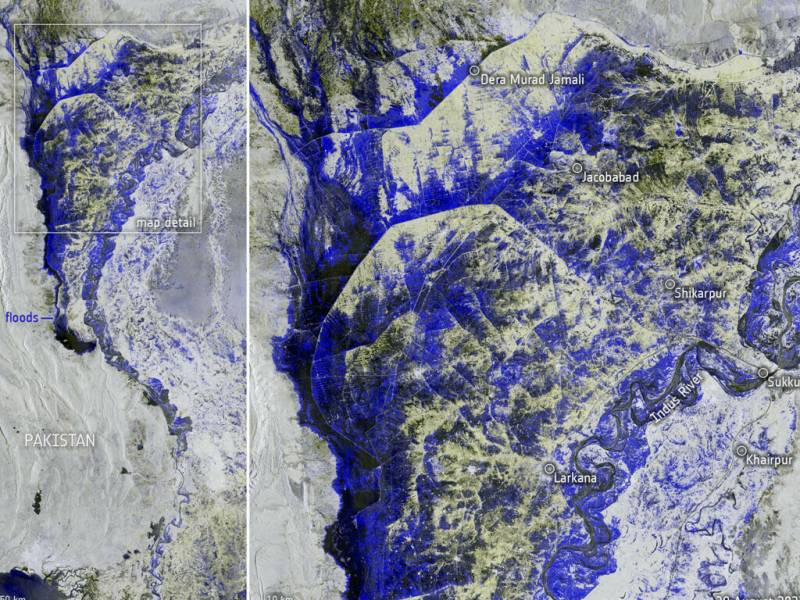 Rains, described by UN chief Antonio Guterres as a “monsoon on steroids” have claimed hundreds of lives since June, unleashing powerful floods that have washed away swathes of vital crops and damaged or destroyed more than a million homes.

Data from the EU’s Copernicus satellite has been used to map the scale of the deluge from space to help the rescue efforts, the ESA said in a statement.

“Heavy monsoon rainfall – ten times heavier than usual – since mid-June have led to more than a third of the country now being underwater,” it said.

The agency released images from the satellite showing an area where the Indus River has overflowed “effectively creating a long lake, tens of kilometres wide”, between the cities of Dera Murad Jamali and Larkana.

Officials say more than 33 million people are affected – one in every seven Pakistanis – and reconstruction work will cost more than $10 billion.

Guterres has called the floods a “climate catastrophe” and launched an appeal for $160 million in emergency funding.

While it is too early to quantify the contribution of global warming in the floods, scientists say the rains are broadly consistent with expectations that climate change will make the Indian monsoon wetter.

A recent study, based on climate models, predicted that exceptionally wet monsoons in the Indian subcontinent would become six times more likely during the 21st century, even if humanity rachets down carbon emissions.