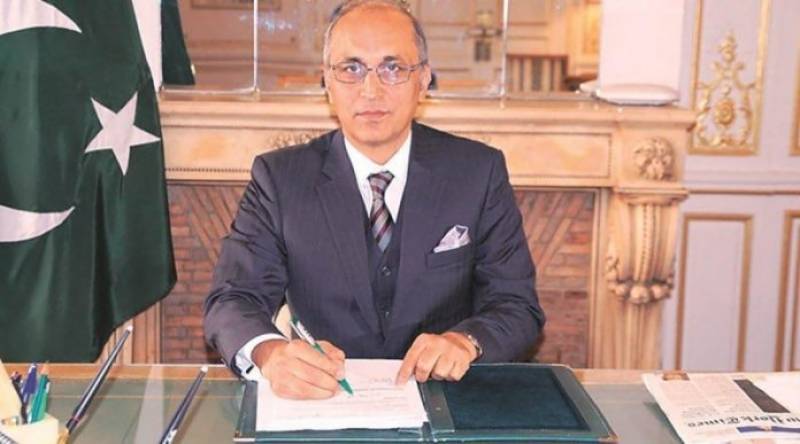 BEIJING - Pakistan Ambassador to China, Moin Ul Haque has said that the second phase of China Pakistan Economic Corridor (CPEC) was people centric and this flagship project would directly benefit common people by creating jobs, alleviating poverty and improvement in the livelihood.

“In the second stage of CPEC, we are going into agriculture cooperation with China. Pakistan is an agricultural country and we need to modernize our agriculture system, upgrade yield of our crops and new seeds development.”

“And all we can do under the CPEC projects which will be directly befitting people of Pakistan by job creation by alleviating poverty and improving the livelihood of people,” he said while talking in ‘The Point’ a current affairs programme of China Global Television Network (CGTN).

Ambassador Haque said that CPEC since its launch in 2015 during President Xi’s visit to Pakistan had progressed very steadily. It was a very comprehensive project in the areas of infrastructure development, energy, transport, and telecommunications.

He said that the CPEC was developing smoothly and mentioned the energy sector had helped Pakistan overcome its critical needs in energy sector.

The infrastructure had improved while Gwadar was progressing well which would not only help socio-economic development in Pakistan but it would also help regional integration.

“We had shortage of electricity in last few years but now we are reaching a stage that we will have a surplus energy in Pakistan,” he added.

While dismissing an impression that the CPEC projects were progressing slow, he said that since he came here, he had been meeting with Chinese entrepreneurs and companies who were already working in Pakistan and like to expand their footprints in Pakistan and get new projects and investment.

“If there are problems with their projects, these companies would have not been keen to go to Pakistan,” he added.

He said that there were detractors of CPEC who didn’t like China’s rise and friendship between Pakistan and China so they were always opposing it.

To a question about negative environmental impact, he pointed out that Pakistan and China being signatory to the Paris climate accord attached great importance to international climate change.

“All these projects being completed under CPEC framework conformed to the those international standards,” he added.

He said that the government attached great importance to the environment and launched mega projects like 10 billion tree plantation, clean and green Pakistan and in that respect even in the CPEC, projects were very carefully executed and it was ensured that it conformed to the international standards.

On Pakistan and China relations, he said that both the countries had very a special relationship which had been nurtured over the years by the successive governments and people of the two countries. “So, no wonder that we call each others as iron brothers.”